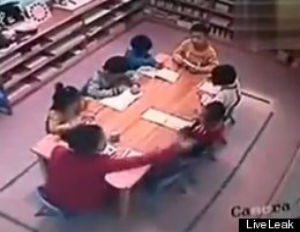 A Kindergarten teacher from Sky Montessori in China is under investigation after a video was released of her hitting several of her students repeatedly for giving wrong answers to math problems.

The parent of a child who came home with bruises and swollen eyelids complained.

The video released by LiveLeak shows the teacher, Li Zhuqing, hitting several children over and over within a ten minute period.