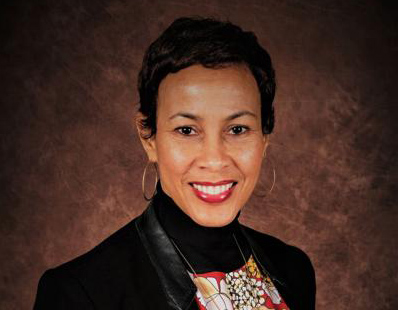 Christina Francis has made a lifelong habit of being a quiet power. The ability to lay low while doing great work, only to surge ahead at the finish, stunning her peers and competitors, has served her well. Most recently, it landed her in the lead at Magic Johnson Enterprises, where in January, she was named president.

Francis, who cut her teeth in business with strategic marketing roles at top companies including Walt Disney World, Nissan Motor Corporation, and IBM, wasn’t competing with anyone other than herself for the coveted position.

Ever since Johnson returned to the Lakers organization as president of basketball operations in February 2017, Francis has been effectively leading the company with Johnson still serving as chairman and CEO.

“Earvin had a grand plan and I just kept doing the work,” says Francis. Especially once her boss accepted the Lakers post, “He was very clear in letting me know he was ready for me to step out there, he just was waiting to see that I was ready. He’s been an amazing mentor and, yeah, I’m ready.”

Francis first met Johnson in 2003, when she was an account manager at the multicultural advertising agency UniWorld Group, leading national campaigns for Lincoln Mercury. Johnson was impressed, and Francis was soon hired to market and run his 30 Burger King restaurants. Within two years, she was recruited by the Orange Bowl Committee to be chief marketing officer for the South Florida sports brand which, during her tenure there, logged record growth and visibility.

In 2010, Francis was tapped by the NFL Players Association to be vice president of marketing and events. In 2014, Johnson recruited Francis back to what was by then a burgeoning business empire with a growing portfolio of investments in companies focused on serving emerging multicultural communities. As senior vice president of marketing and communications at Magic Johnson Enterprises, the role brought together the broad range of experience Francis had cultivated throughout her career. It also spoke to her desire to serve a larger purpose, a core value in the New Orleans home where she was raised.

The youngest of six children, Francis earned her MBA from the University of New Orleans after majoring in political science and Spanish at HBCU Xavier University. Perhaps it was there that she perfected the art of flying under the radar.

“I was the one who sat in the back of the class, talking,” she says, laughing. “I was Christina on the yard, hanging out. But I took good notes and always had a good ear for mastering the concepts. No one knew I was headed to be valedictorian.”

Not only did Francis graduate as valedictorian in just three years, outside of her family, few were aware that she was a straight A student (save one B, in English Lit) and that her father was Norman Francis, the college’s storied president.

“I worked hard and I played hard,” Christina says of her school days. “I still do that here. When you’re doing something you love and believe in, its hard to identify what’s hard. I think the hardest part for me is, I’m actually kind of shy.”

The January announcement of her promotion sparked a heightened level of visibility that Francis is still processing. “It’s been the most humbling experience to have the texts, emails and LinkedIn responses,” says Francis. “I have been behind the scenes for years promoting my boss, promoting the company, the mission, and our progress. People who knew me weren’t surprised. People who didn’t were completely shocked because they had no idea what I did.”

Her transition has been seamless, underpinned by Johnson’s unqualified support. “Christina is a consummate professional and brilliant businesswoman,” the NBA legend said in a press release. “I trust her to continue growing this company to new heights and establishing new partnerships in the coming years.”

The company’s mission to do well while investing in emerging multicultural communities is sure, but Francis is still working through the rest.

“He’s put a lot in my hands” she says of her boss. “Right now I need to own where I am, and take stock of where I want the company to go. Earvin is open to change, he’s open to growth, he’s open to always finding ways to do things better. So I can’t tell you right now where you’ll see my imprint, but I know that’s why he placed me here.