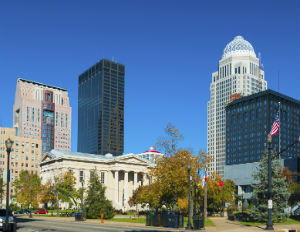 If you’re unfamiliar with Louisville’s food scene, you’re seriously missing out. Offering a diverse selection of cuisine options, Louisville restaurants blend traditional Kentucky cooking with a cosmopolitan mix of eclectic international cuisine including French, Italian, and Mediterranean fare, Mexican and American Southwest influences, as well as classic barbecue. Anything you’re searching for, you’re sure to find it in Louisville.

Looking for some ‘finga’ lickin’ good southern food? This should be your first stop when you touch down in Louisville. Located in the historic Whiskey Row of downtown Louisville, Doc Crow’s offers some of the most savory flavors when it comes to American Southern cuisine. The traditional menu celebrates classic seafood favorites from the coastal areas and diverse barbecue styles found throughout the interior regions. And if you like a good, stiff drink, this Southern institution pays homage to its Whiskey Row location with a wide selection of the world’s great whiskies and a focus on America’s most celebrated spirit: bourbon.

Proof on Main isn’t your ordinary hotel restaurant. That’s a given once you walk into its home located inside the 21c Museum Hotel. From its menu to its dÃ©cor, chef Michael Paley shows no fear of bold textures and rustic flavors such as his octopus bagna cauda and roasted bison marrow bones. His gift of transforming simple foods into the sublime makes visiting seasonally a must. Traveling solo? Visit the bar to sample dazzling libations created by the award-winning crew of craft-cocktail makers and take in the contemporary art displays.

Now how’s this for a beautiful transformation? Chef Allan Rosenberg has been building his reputation in Louisville for years, including founding the Papalino’s Pizza chain. Now he’s taken over another pizza place, but instead of pie, Rosenberg’s plating up Southern comfort food. With a menu rooted in Southern favorites and a bar program that is gaining quick attention, Fontleroy’s seems to have cooked up a recipe for success. Classy-casual decor is the setting for dishes like duck &Â waffles with foie gras butter and bourbon maple syrup and fried green tomatoes with blue crab, pimento cheese with lavosh, fried bologna and aioli. A raw bar, drinks, beers, and Rosenberg’s legendary charcuterie are also on tap.

In true ‘started-from-the-bottom’ form, you would think this venue is ‘Over the 6′ instead of ‘Over the 9.’ Veteran Louisville chef Griffin Paulin has transformed the Falls City Brewing/Old 502 Winery location from a distillery to a dining destination. Offering twists on traditional pub fare, ‘Over the 9′ serves up dishes such as “burnt endsâ€ of tofu with house barbecue sauce and brioche points, cashew butter and jelly, and some seriously in-demand Scotch eggs. There are also libations such as the Ballyhoo (bourbon, blood orange liqueur, bitters) and Pepper (pepper moonshine, citrus, seaweed simple syrup) to go with (of course) readily available beer and wine. Quite the interesting menu, you’re sure to find something different, but tasty here.

Hot chicken isn’t just for Louisiana–so move over Popeyes! Joella’s is one of the first of its kind in Louisville, with veteran Louisville restaurateur Tony Palombino (of Boombozz Pizza fame) at the helm of the ship. Joella’s hot chicken is brined overnight, fried to order, and tossed in your choice of seasoning oil including “tweener”Â (medium), hot, and “Fire-in-da-Hole”Â which is helpfully described as “inferno.”