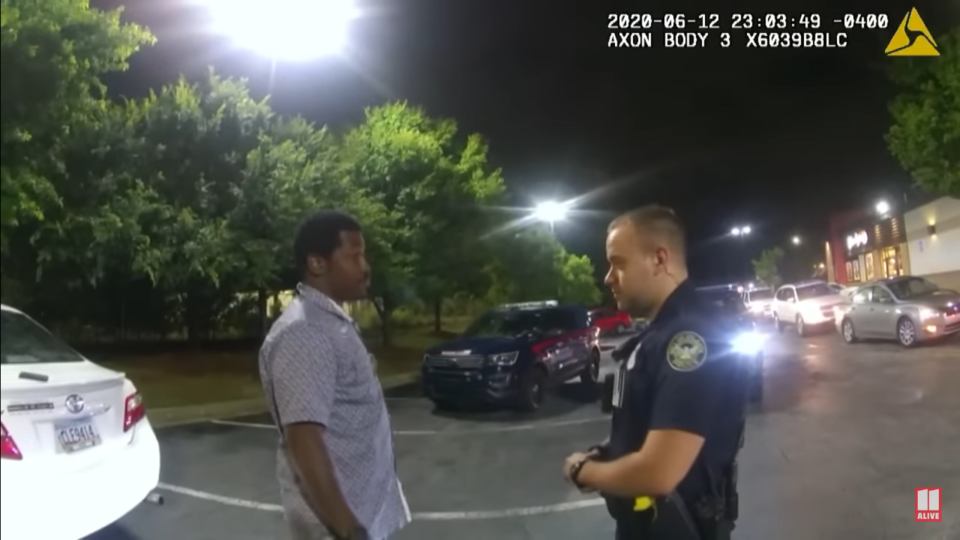 Rayshard Brooks stands with an Atlanta police officer before he was fatally shot on June 12, 2020. (Screenshot: Youtube)

The city of Atlanta agreed to pay $1 million to settle a lawsuit brought by the widow and estate of Rayshard Brooks, who was fatally shot by a white police officer in 2020.

The New York Times reports the Atlanta city council unanimously agreed to the settlement nearly three months after prosecutors determined the two officers involved in Brooks’ death did not commit a crime and their use of deadly force was reasonable when Brooks was shot on June 12, 2020.

Brooks was fatally shot in Atlanta less than a month after George Floyd was killed in Minneapolis, which started the 2020 resurgence of the Black Lives Matter movement.

In a statement, attorneys from the firm Stewart Miller Simmonds Trial Attorneys said, “although the children of Mr. Brooks have lost their father, settling the case will undoubtedly assist them with future plans as they come of age.”

The attorneys added the Brooks family was “disappointed that prosecutors didn’t pursue a criminal case against the officers involved in Mr. Brooks’s death.”

According to the Times, Atlanta City Councilman Dustin Hills said at a council meeting on Monday the settlement will be paid to Brooks’ widow, Tomika Miller, the Brooks estate, and the firm.

On the night of June 12, police found Brooks sleeping in his car in the drive-thru lane of a Wendy’s. The encounter between the police and Brooks started calmly. However, after about 40 minutes, things began to escalate when the officers tried to arrest Brooks, which led to Brooks hitting one of the officers, grabbing the other officer’s taser, and firing it before he took off running.

A chase ensued, and officer Garrett Rolfe, a seven-year veteran with the Atlanta Police Department, shot at Brooks three times, hitting him in the back and buttocks. Brooks was taken to a local hospital, where he died after surgery.

Brooks’ death led to Atlanta protests, and protestors burned down the Wendy’s where the incident occurred. The incident also led to the resignation of Atlanta Police Chief Ericka Shields. Rolfe was initially charged with murder and a litany of other charges, and the other officer, Devin Brosnan, faced several lesser charges, but they were later dropped. Rolfe was reinstated to the department by the Atlanta Civil Service Review Board.