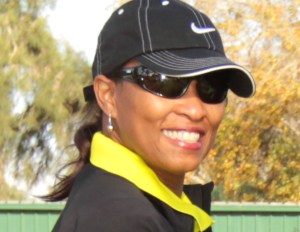 Golf was once an exclusive sport that only appealed to a certain class of people but then barriers were broken and the appeal has expanded in recent years. There was a time where Blacks were only allowed on the course as ‘the help’ or if they were lucky, a caddy. Things have changed and hopefully more paths can be blazed in the near future.

One professional has decided to take it upon herself to make a change herself. Clemmie C. Perry, a newbie golf enthusiast, has started, not one, but two organizations that she says will change the perception amongst people of color. She made a special visit to the Black Enterprise Golf and Tennis Challenge this past Labor Day Weekend to meet some people with Black Enterprise and to also further her cause by networking with other like-minded individuals.

Perry spoke to BlackEnteprise.com about how she became interested in golf, her purpose for attending the Golf and Tennis Challenge and why she founded her organizations.

BlackEnterprise.com: What led you down the path to take an interest in golf?

Clemmie C. Perry: In 2012, I had an opportunity to play with a friend, who was a golf enthusiast. Later that year, my youngest brother retrieved a set of discarded golfs in the trash for me to use. Another brother gifted a golf lesson and I was hooked and driven to share the experience with other women of color to learn the game of golf.

I also gained interest in the vast business opportunities and a new network of people in the golf community to share common goals and interest.

You have an organization, Women of Color Golf (WOCG), could you explain what it is, what you do and what doÂ you hope to achieve?

WOCG was created as a pathway for Women of color to gain exposure to and learn the game of golf. Our goal is to offer an affordable outlet to participate in the game. WOCG hopes to achieve and develop a platform for women of all colors to access and find like-minded individuals to enjoy the game of golf.

The perception can be that golf has been traditionally seen as a sport where there are few people of color, but it seems the tide has turned vastly. Why do you think that is?

There are many African-American golf pioneers that have a historical importance and numerous contributions to the expansion and development of golf in the United States. To name just a few, they include African American golfers such as William “Billâ€ Powell, Jim Thorpe, Calvin Peete, Lee Elder, Charlie Sifford and Jim Dent. These individuals positively impacted the golf community despite the pervasive prejudice and racism of the Jim Crow era.

When Tiger Woods won the Masters and other professional golfers of color begin to be covered more prominently on network TV; it made the game more appealing to Blacks. Nearly two decades after Tiger Woods’ arrival, golf still struggles to attract minorities.

How important is it to have young people learn the game and principles of golf?

Golf provides the opportunity for young people to learn life skills, such as practice, respect, perseverance, and honesty, preparing them to meet the challenges of today’s world with confidence.