Coach Students to Unlock Their Potential 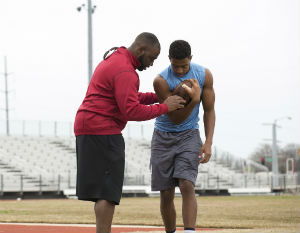 Do you have a personal life coach? I don’t, but coaching is reportedly quiteÂ effective.

Last year I attended the National Urban League’s National Higher Education Summit, sponsored by USA Funds. All the panels were inspiring and hard hitting, but a speaker from InsideTrack, a company that supports student persistence, was particularly enlightening.

InsideTrack takes the concept of executive coaching and applies it to college students.

“We want to help students develop a plan that would fully empower them and hold them accountable,â€ says Dave Jarrat, the company’s vice president of marketing.

Why does coaching help students persist? Jarrat says the biggest barrier is often lacking a sense of self-awareness, a sense of belonging, students wondering if they’re college material, not knowing how to connect to the school community or to professors.

Most students go through aÂ period of uncertainty, Jarrat says. The coaching helps to normalize it.

“We help them develop a plan–we don’t hand them fish, we teach them to fish,â€ Jarrat says. “We’ve coached 1.3 million students and seen 10% to 15% gains in enrollment, persistence, and completion.â€

Depending on the school, the coaching can be a combination of face-to-face interactions, video conferencing, text messaging, or mobile apps, Jarrat says.

“Our ultimate goal is to help them succeed in life. We want them to develop their own plan by identifying and achieving their goals.â€

Maybe that’s why when I spoke with Kyren Winfrey, a sophomore at Ivy Tech Community College in Indianapolis, he sounded so confident and directed.

Winfrey started school knowing that he wanted to pursue firefighting as a career. He is already volunteering at community service events and with a volunteer fire department where he gets training and hands-on experience.

“I’m a homeland security-public safety major,â€ Winfrey told me. “My goal is to be a firefighter-paramedic.â€

Ivy Tech assigned Winfrey an InsideTrack coach his freshman year. Although they met once in person, all the coaching took place by text, phone, or e-mail. Winfrey says the coaching was important to him.

“We went into depth talking about how I could improve. We talked through any problems and looked for concrete solutions. If she couldn’t help me, she would point me in the right direction.â€

Winfrey says he’s now a stronger student and “I know how my school works.â€ Having the extra support and help in figuring out what works best were most helpful, he says.

For more about InsideTrack, watch the video below or go to its website.