Colin Powell: There's a Level of Intolerance in Some Parts of the Republican Party 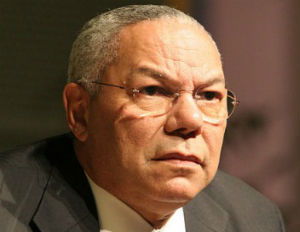 Gen. Colin Powell, the first black Secretary of State, and former chairman of the Joint Chiefs of Staff, spoke out on the state of the GOP primary to NPR News.

While discussing his time in the Reagan White House and his relationship with the recently deceased Nancy Reagan, Powell was asked how the former first lady felt about the GOP candidates constantly invoking her husband’s legacy to bolster their conservative credibility.

Powell responded that although he believed she was “flattered,” she was also “disturbed.”

“I’m quite sure, that some people invoking his legacy really are not applying his legacy in their political campaigning or in some of the things they’re doing. It’s going to be interesting over the next several days or several weeks as people reflect on Mrs. Reagan and then once again on President Reagan,” Powell said.

The former Secretary of State expressed hope that this time of reflection would “calm the temperature a bit,” and help the GOP candidates “get out of the problem we’re in now with screaming, and the shouting, and childhood taunts.”

When further questioned about his thoughts on the state of the GOP primary, Powell responded that there is still the same “level of intolerance in some parts of the Republican Party,” that he observed in both the 2008 and 2012 elections.

Although Powell infamously voted for Obama twice, he has repeatedly confirmed his status as a Republican.

Admonishing the GOP candidates for playing what he called “junior high tricks on one another,” Powell accused them of “belittling the country and belittling the office which they are striving to gain.”