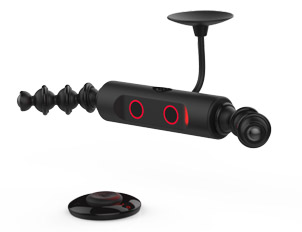 Christian Johnson never intended on becoming an inventor. But when her son was ready to start driving, she was not only worried about what all parents of teenaged drivers worry about—distracted driving, she was also distressed about the possibility that her son could end up a victim of DWB (Driving While Black). Then about three months after her son began driving, her mother had a diabetic stroke while driving.

So Johnson, 38, decided to develop Driver Watchdog, a smart driving safety device with dual cameras that allows users to see inside and outside of their vehicles through a secure mobile application.

“In the wake of all the police misconduct, my anxiety was through the roof,â€ says Johnson, a single mother. “I started looking for a product that did what I wanted it to do, including real time monitoring and notifications. I started putting together all of the different features I wanted and it just grew from there.â€

The product, which requires no professional installation, will notify up to five contacts in the case of an emergency. Drivers can press a panic button during a police stop, and the device also notifies owners in the event of any trauma that happens to the vehicle. Driver Watchdog also detects high acceleration, hard braking, and more. The geo-fencing feature notifies owners by email, text or phone if the car enters an owner-defined restricted area, and the two wide-angle HD cameras are also enabled with motion detection and night vision. The latter feature can be useful for drivers approaching their automobiles in a desolate parking garage late at night, notes Johnson. The device comes with a long-lasting battery that can be charged with a USB port.

Owners have the option to view data in real-time or review footage and vehicle information (stored in the cloud) at a later date. Unlike its competition–OnStar or Progressive’s Snapshot–vehicle data is not under surveillance by a third party.

“I’m a consumer and I made this specifically for consumers. OnStar freaks me out because it is a third-party monitoring group. It’s so invasive. Driver Watchdog is for your eyes only. You do what you want with your own evidence,â€ says Johnson, who recently completed an accelerated Master’s in Tech program at the University of Buffalo. “Plus, since there is no dashboard or screen, the driver isn’t distracted by it.â€

Working inside the D!G (Design Innovation Garage), an incubator in Buffalo, New York, Johnson, a solopreneur, heads up a team of six. Thus far, she has bootstrapped the company using $65,000 from her savings along with help from family and friends. In June, she also obtained a $30,000 loan from the Buffalo Urban League’s Minority and Women Technical Assistance and Loan Fund, and won a minority business grant from First Niagara Bank andÂ National Grid Corporation.

“Our goal and mission is to help save lives and provide jobs in Buffalo. We want to use recycled products and have Driver Watchdog assembled in the United States,â€ says Johnson.

The company launched an Indiegogo Campaign in May to help bring the product to market. Johnson expects that Driver Watchdog will be available for purchase in November for $399, but shoppers can pre-order the technology now on Indiegogo for $229. Subscription service will cost between $9.99 and 19.99/month depending on how much data is used, and users will be able to add the data onto their AT&T, Verizon, Sprint or T-mobile cell phone bill.