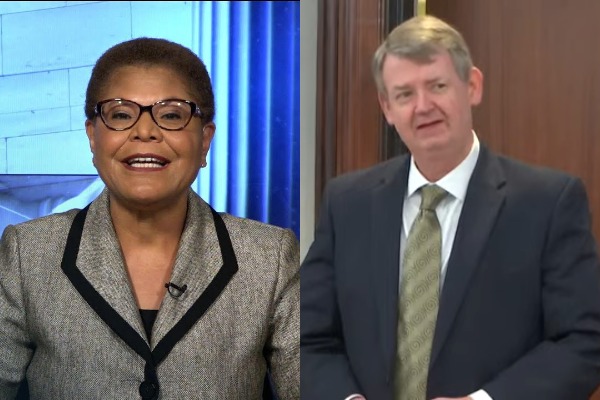 California Congresswoman Karen Bass is not here for the “despicable” comments against Black pastors during the Kyle Rittenhouse trial.

Last week, defense attorney Kevin Gough went viral for all the wrong reasons after he made a plea against Rev. Al Sharpton and other “Black pastors” being present during the trial.

“We don’t want any more Black pastors coming in here,” Gough said on Thursday while claiming the presence of “high-profile members of the African American community” could potentially sway the predominantly white jury, MSN reports.

On Sunday, Bass blasted Gough for his “despicable” comments while defending one of the men charged in the killing of Ahmaud Arbery. She also noted the clear biases that took place early on in the trial.

“But when they were selecting the jury, remember, they selected pretty much an all-white jury. And then the judge acknowledged that that was a problem and allowed the jury to be seated anyway. So, I think that particular trial is off to a bad start,” Bass said on CNN’s State of the Union.

On #CNNSOTU Democratic @RepKarenBass tells CNN’s @jaketapper that the trial for the murder of Ahmaud Arbery is “off to a bad start.” https://t.co/iGiPI495S6

Bass also noted how “sad” the country’s response to racial injustice has shifted since the unrest of 2020.

“A year ago, we were talking about racial reckoning, and it seemed to be an enlightened period. And now we have had major setbacks,” Bass said. “And I think that people understand that you can use race politically. It charges people up. It’s a highly emotional issue. And I think it’s just really sad.”

Gough became the topic of discussion last week after claiming the presence of “Black pastors” was only in alignment with “political interest” since they had no direct ties to the case.

“Obviously, there’s only so many pastors they can have and the fact that their pastor’s Al Sharpton right now, that’s fine, but then that’s it,” Gough said in court last Thursday.

“We don’t want any more Black pastors coming in here, or other, Jesse Jackson, whoever was in here earlier this week sitting with the victim’s family trying to influence a jury in this case.”

On Friday, Gough issued an apology while saying he would put in a more proper motion on Monday, The Hill reports.

“I will let the court know that if my statements yesterday were overly broad, I will follow up with a more specific motion on Monday, putting those concerns in the proper context,” Gough said. “And my apologies to anyone who might have inadvertently been offended.”