Conservation Scientist Goes Out into the Wild and Traps Black Bears 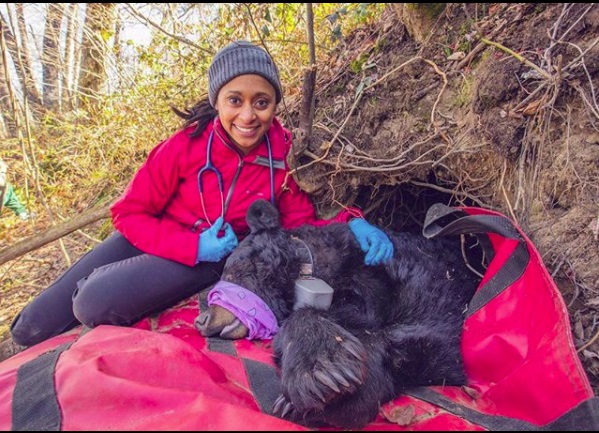 A few weeks ago I attended the fourth annual Student Research Colloquium of the NYC Science Research Mentoring Consortium at the American Museum of Natural History. I wrote about the real scientific research teens from across the city had engaged in under the mentorship of accomplished scientists.

I also wrote about meeting Rae Wynn-Grant, Ph.D., a mentor to one of the student teams that participated in the colloquium, and a Conservation Science Research and Teaching Postdoctoral Fellow with the Center for Biodiversity and Conservation at AMNH. She studies black bear populations in the western U.S.

Wynn-Grant is one of the few African American female ecological conservationists—if not the only one. I spoke with her recently to learn more about her work.

RW-G: I am a carnivore ecologist. I study large carnivores like black bears and African lions.

With my colleagues, I create assignments that will help endangered species and places avoid extinction. So we get to capture and trap big wild animals, but the overall purpose is to understand them better so we can save them from extinction. Black bears are actually not endangered, but we want to minimize human-bear conflicts in areas where they’re expanding.

BE: How did you get interested in the conservation of bears?

RW-G: Growing up I fell in love with nature shows—I could always get away with watching a lot of PBS. I was captivated watching shows that included interactions with really cool animals and became fascinated with the jungle, which my parents thought was amusing and cute. But they didn’t think there was a career opportunity in studying wildlife in the wild.

At Emory University I went on a study abroad program that my scholarship would cover—a program in East Africa which was really just camping the entire summer.

Driving out of the city I saw a giraffe, an ostrich, and other majestic wild animals. And that was it. I remember thinking, this is what I love. That was when I nailed down what I wanted to do forever. More than a decade later I’m more in love with this work than ever.

BE: What advice do you have for others who’d like to do what you’re doing?

RW-G: I went to a low-performing public high school where there was no expectation that I or my black peers would succeed in science and math classes, and we didn’t. But I’m so glad that my grades didn’t deter me from becoming a scientist. I now have a Ph.D. in ecology and evolutionary biology.

Performance shouldn’t necessarily be what you base your life’s work on. The way you perform in school can be complicated and informed by so many factors, so my advice is, don’t let performance influence your passion. They don’t always go hand in hand.

Going to a good college was transformative for me. I encountered professors who expected me to excel in calculus my freshman year—and I did, with their encouragement and by taking advantage of office hours. I ended up taking several different kinds of calculus and doing well.

Secondly, there’s a perception that being a scientist means you’re working in a lab wearing a lab coat.

One doesn’t have to be as adventurous as my colleagues and I are, but there are many roles in conservation science, whether it’s education, policy, communications, field work, or a combination. It’s a field that more people need to consider.

BE: What about danger?

RW-G: I am really careful. I have no interest in getting hurt! Snakes and mosquitoes are more dangerous than black bears.

I never handle them unless they’re tranquilized. I set traps and tranquilize them from a safe distance, and I use bear spray, which is like pepper spray but has a longer projectile. I also work with Karelian bear dogs, which were bred to hunt bears in the Far East. We check every trap daily—no traps are left in the field after we leave.

BE: Do you get to see Neil deGrasse Tyson around the museum?

RW-G: Yes! He’s a brilliant, brilliant scientist. The museum is filled with them, but he is certainly iconic. Every so often I go into his office and chat with him about my career. I’m grateful that I’ve been able to carve out a bit of a mentoring relationship with him.