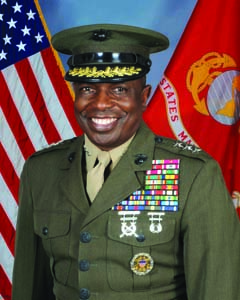 Lt. Gen. Walter E. Gaskin has held several leadership positions during his nearly 40 years in the U.S. Marines. As only the fourth African American in Marine Corps history to earn a three-star grade, he served as the commanding general of the 2nd Marine Division at Camp Lejeune, North Carolina, and commanding general of II Marine Expeditionary Force (Forward). During this tour, Gaskin served as commanding general of Multinational Force – West, which had 35,000 troops in Anbar Province, Iraq.

Currently deputy chairman of the NATO Military Committee in Brussels, Gaskin has a leadership role in the branch that provides military and operational advice to NATO’s secretary general and North Atlantic Council. Black Enterprise spoke to Gaskin to get his tips on effective organizational leadership. Here’s what he recommends.

Be fair.
Gaskin says that any candidate looking to join the organization–be it a company or otherwise–should have a working knowledge of what they intend to do for the organization. Then that will be evaluated over time. “But what they seek from bosses, or from those who they expect to lead them, is fairness,â€ says Gaskin. “Now, you can be firm because there are different types of leadership, whether it is persuasive or what we call dogmatic: the stern taskmaster. But they do expect to be evaluated fairly for what they do.â€

Know your people.
“You’ve got to get out and see who [your team members are], what they do, and what they expect from you,â€ Gaskin says. “They expect for you to know the business.â€ Gaskin also states that while the people within your organization may not expect you to be as technically proficient as they are at their level, they do expect for you to have an understanding of how they contribute to the whole. “Some persons can motivate by explaining how disappointed they are in what you haven’t done. Then there are others that you could say that to them and it will just roll off their backs like water and not even faze them.â€ Gaskin says it’s important to understand the right leadership approach for each individual.

Get the buy-in.
The ability to communicate a vision and have that vision shared within an organization is one of the fundamentals of effective leadership. “We have seen over and over again, when you are able to convey that people are a part of a team, that organization excels at whatever mission is assigned,â€ Gaskin says. “It’s rapidly developing that buy-in, that loyalty, that interdependency, that they are a part of a team that has to accomplish the objectives. When you fail to get everybody sure of where they fit in and how everybody is dependent on each other to do their part, then you have kind of a bumpy road.â€