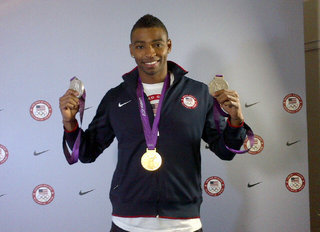 Swimmer Cullen Jones has four Olympic medals and one big heart. In 2008, The 6’5, 28-year-old Bronx native became the second African American in history to win an Olympic gold medal for swimming and in 2012, he added three more medals to his collection. But in addition to the Olympic glory and his desire to start a clothing line, Jones also does philanthropic work with Make A Splash, an initiative by the USA Swimming Foundation dedicated to water safety and teaching children how to swim.

BlackEnterprise.com caught up with the North Carolina State University graduate to talk about his life inside and outside of the pool.

BlackEnterprise.com: According to the Make A Splash initiative by the USA Swimming Foundation, 7 out of 10 African American children can’t swim. Some of that is surely due to pool access, but what do you think drives such a startling statistic?

Cullen Jones:Â Studies show three main factors. The fear trumps everything–the fear of drowning and the fear of water in general and then there’s lack of Â parental backing. A lot of kids essentially inherit their parent’s fears and finally, there’s discomfort with physical appearance. Â Fear can also settle in if a kid goes through a traumatic water experience early on.

On your Make a Splash tour, you travel all of the country giving talks and teaching kids how to swim. What’s your favorite part of participating in this program?

Oh, definitely the interaction with the kids. When I see those kids, it’s not about who I am or what I’ve done, it’s all about them. It takes me back to when I was that same age and exploring the water. I love engaging with the kids and every one of them is different. Some of them are terrified and some of them want to jump in the water before I even get in there.

After the 2008 Olympics, I ate whatever was in front of me. I put on 20 pounds in four months. It was not fun trying to take that off, so I make sure I’m never there again. I don’t count calories because that’s torture, but I do eat as many greens as possible and lots of lean meats. I don’t stay away from carbs as much as I should, but minimal. Then I have about 30 hours a week of swimming and lifting.

That’s a lot of hours in the pool and gym. Â Many Olympic athletes have regular 9 to 5 jobs when they are not training. What do you do outside of the pool in between Olympic games?

Outside of the pool, I hang out with friends, play video games—the kind of stuff anybody does. I work with a couple sponsors who ask me to speak on different topics, and sometimes specifically on swimming and business. The way I work my swimming goals is just like I would if I were behind a desk at a 9 to 5. For me that’s how I stay focused. I keep changing my goals. After swimming I want to start a jean company.