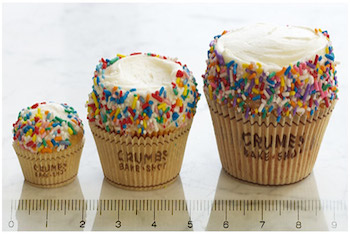 If you’re traveling into or are a resident of New York City, and figured you’d stop by Crumbs Bake Shop in Times Square, you’ll be in for quite the surprise.

The largest U.S. cupcake retailer has recently announced that it will be closing indefinitely. Crumbs, which specializes in oversized cupcakes and went public in 2011, shuttered nearly 50 locations in 10 states, as well as the District of Columbia.

“It is a shame that they went out of business,” said Gina Mackey of Queens, New York. “Had I known it was going to go out of business, I would have come and gotten my last Crumbs cupcake.”

Word of the country-wide closing comes less than two weeks after the NASDAQ announced it would stop trading Crumbs, which hoped that it could fuel growth at a nationwide chain. Magnolia Bakery, which also helped to make Crumbs famous, brushed its competitor’s closure off, pointing to its diverse pastry offerings compared with Crumbs’ signature dessert. “It is early, of course, but we have already seen an increase in customer inquiries on the heels of the announcement,” a representative for the smaller New York bakery said in an email.

Crumbs’ steep decline in profitability became a red flag immediately after its debut on the market. The quarterly report from March indicated that the company had an accumulated deficit of $28.8 million.