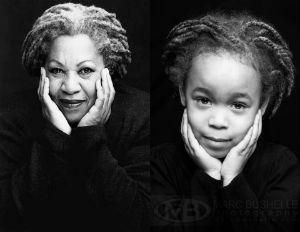 Father’s Day is a time to honor dads by thanking them for the contributions and sacrifices they make in the name of fatherhood. One dad, in particular, has chosen to support his daughter’s self-esteem via his own artistic abilities.

According to Upworthy, photographer, Marc Bushelle, created the photo series, “The Heroines’ Project,” featuring his daughter Lily, because he wanted to spend more time with his wife and child, and thought the project would be a unique way to teach his daughter about iconic women in history.

“I thought this also could be a great way to build her confidence and sense of self worth,” Bushelle told Upworthy. “This series was inspired by another photographer who did something similar with her daughter.”

Bushelle may be referring to photographer Eunique Jones, who created the year-long project “Because of Them, We Can,” where Jones dressed young girls as influential and powerful figures of women’s history, alongside some really inspiring Â quotes.