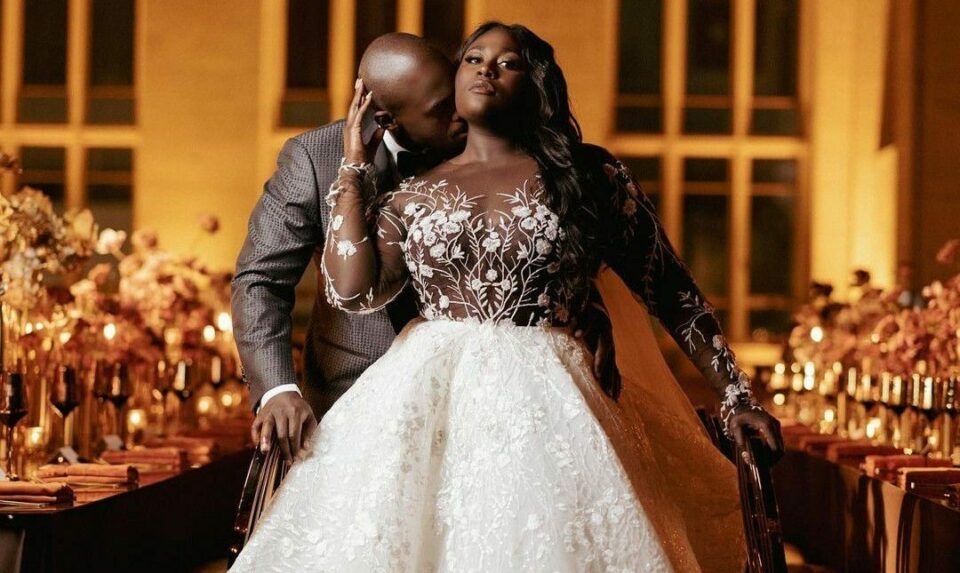 Actress Danielle Brooks did it big for her wedding to fiancé Dennis Gelin. The Orange is the New Black star shared photos showing off the two lavish gowns she wore for the big day.

Brooks seemingly made reference to her Tony-nominated portrayal of Sofia in The Color Purple on Broadway by quoting her character in her Instagram caption.

She included a special shoutout to the two different designers of her gowns as well as her glam team.

Brooks and Gelin are based in Brooklyn but opted for a destination wedding in Miami at the historic Alfred DuPont Building, People reported. Their two-year-old daughter, Freeya Carel, also took part in the nuptials as the flower girl.

When walking down the aisle to exchange her views, Brooks wore a gown from the Black-owned brand Alonuko by designer Oluwagbemisola Okunlola.

Brooks explained why she always wanted to wear two wedding gowns for her special day and how important it was for her to work with two designers she respects.

“We thought it would be best to do a first look reveal so that we could go ahead with bridal party pictures and not hold up our guests after the ceremony,” she told Vogue. “I decided to wear Christian Siriano for the reveal. We have been friends ever since my career first began.”

After years of wearing Siriano’s designs on red carpets, Brooks shared a separate post thanking the Project Runway winner for being a friend that came through when she needed him most.

“Words can’t express how grateful I am to have a friend like you. You’ve held me down from one of my first carpets to the most important day of my life!” Brooks said on Instagram. “I love you and appreciate your friendship! Thank you for my 3 in 1 dress! Love you @csiriano.”

Her husband matched his wife’s lavish look with designs from the Black-owned menswear line Garcon Couture. Cheers to Danielle and Dennis for doing it big for the Black love wedding day.