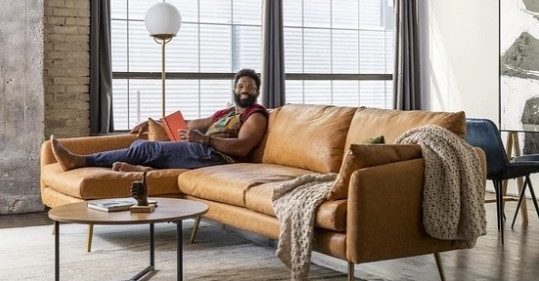 Darryl Sharpton’s story proves that athletes can thrive beyond football. He prepared well for life after football, by embracing his furniture interests. He co-founded two successful furniture companies-- Edloe Finch and Albany Park, with his wife, Jessica. Photo credit- Instagram

Former NFL linebacker and Houston Texan Darryl Sharpton is making big moves beyond the football field. Sharpton is proving that life beyond football can be both rewarding and lucrative, even in the midst of COVID-19.  He founded Edloe Finch and Albany Park, along with his wife, Jessica Sharpton. The couple is thriving as business partners. They show no signs of slowing down.

CNBC reported that Sharpton played five season as a professional football player,  before exiting the game permanently, due to injuries. However,  Sharpton’s career change is putting him in the spotlight, once again. CNBC further explained that the e-commerce furniture businesses are not only thriving, due a boom in online shopping spurred by the Covid-19 pandemic, but revenue projections have nearly doubled.

According to CNBC,  Amazon and Wayfair are wholesale buyers for the furniture companies. The sales projection was estimated at $10 million in this year, which marked an increase from $3.9 million in 2019.  However, the pandemic pushed this year’s projection to $20 million.

According to Edloe Finch’s website, Sharpton’s introduction to selling furniture did not just begin, nor is it a simple stroke of good luck. In 2008, while pursuing his degree in finance and playing linebacker at the University of Miami, Darryl’s goals of initially earning extra money quickly transformed into an obsession. After being drafted in the NFL by the Houston Texans in 2010, his furniture passion was put on hold, until he turned in his football helmet five seasons later. Multiple knee and shoulder surgeries did not leave the athlete without a plan for his life. In 2017, Darryl partnered with his wife and launched Edloe Finch .

Jessica is reportedly a former oil and gas consultant who opted to switch change careers, after their first child was born. She pursued creating a home building business, which included designing custom homes. However, Jessica wanted to join her husband in his furniture venture.

“Their mission is to manufacture chic modern furniture without the typical industry mark-ups. Edloe Finch operates exclusively online with no retail stores, showrooms or salespeople — passing the savings to you!” the website information read, also mentioning the company is based in Houston, Texas.

The couple’s second company, Albany Park, also has a backstory dating back to 2017. According to the website, Darryl and Jessica left the showroom mentally fatigued, after shopping in an over-priced “designer” showroom with hundreds of sofa options. Additionally, the couple discovered that a new sofa’s delivery was estimated between six and four weeks. A solution-based approach led to the creation of improved furniture models.

Albany Park is described as a company which radically changes the way people shop for sofas. Sofas can be delivered to shoppers through UPS within three business days.

“This method is not only faster but much more convenient and less expensive — these savings get passed on to Albany Park customers everyday.  Albany Park furniture comes packaged in apartment-friendly, space-conscious boxes that can easily be maneuvered in stairwells, tight hallways and throughout any home,” the website information explained.