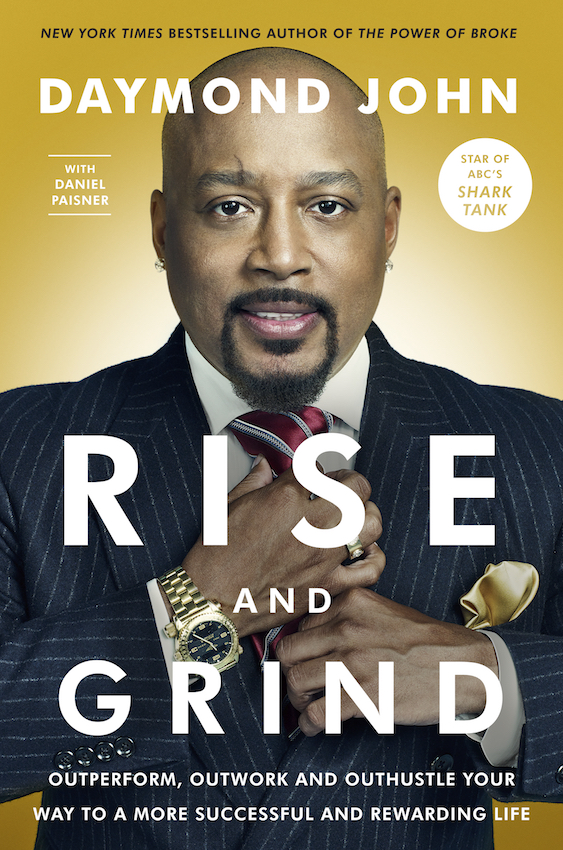 After three successful releases, The Brand Within; Display of Power; and The Power of Broke, the Shark Tank entrepreneur and investor is at it again with his latest book, Rise and Grind: Outperform, Outwork, and Outhustle Your Way to a More Successful and Rewarding Life.

What we know is Daymond John is a hustler in every sense of the word, but this is not for someone looking for a shortcut or quick come-up. John is all about hustling hard and smart. “Convenient though it might be to believe that you can shortcut your way to the top,” says John, “the truth is that if you want to get and stay ahead, you need to put in the work. You need to out-think, out-hustle, and out-perform everyone around you. You’ve got to rise and grind every day.”

What can we expect from the new release? In this collaboration, John looks at everyday routines of individuals including, Gary Vaynerchuk, Wendy Williams, Carlos Santana, and Catherine Zeta-Jones, who people consider to be winning and at the top of their fields. He discusses his obstacles and how coupled with grit and persistence, his hustler’s mentality helped him overcome them and land in the role of success.

A bit about John in case some of you missed the journey from the beginning. John grew up in the Queens, New York, neighborhood of Hollis. Some of his early jobs included handing out flyers and waiting tables at Red Lobster. He started FUBU with three of his closest friends on a $40 budget and turned it into a multi-million dollar entity. In 2009, he started appearing on ABC’s Shark Tank and eventually became a household name. Since then, he has become a New York Times best-selling author, branding guru, highly sought-after motivational speaker, and the founder of the co-working space, Blueprint + Co. He was also appointed by President Barack Obama as a Presidential Ambassador for Global Entrepreneurship. These accolades alone give you some key insights on the type of knowledge and gems Rise and Grind will drop.