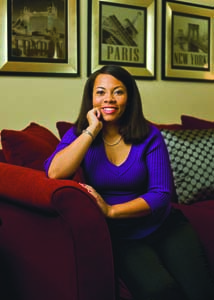 “Up to July 2007, I didn’t really know where my money was going,â€ she confesses, admitting that she was a bit of an impulsive shopper. Harps may have been unaware of her spending but the bill statements were clear: She accumulated $17,000 in debt on three credit cards; $54,000 in school loans; and a $30,000 bill courtesy of the brand-new Nissan Maxima she bought to reward herself for earning a master’s degree in 2007.

Her credit cards financed trips as well as clothes and groceries. After graduation she used credit cards to pay for furniture and a three-week road trip along the East Coast.

“It was ‘normal’ to have credit cards, student loans, and a car payment. Most people think they are doing well financially as long as they aren’t behind. I was no different,â€ Harps says.

But today, she’s focused on attaining financial freedom. “The first thing I did was commit to the goal of becoming debt free,â€ says Harps, who uses financial guru Dave Ramsey’s debt snowball method. Ramsey recommends listing all debt in order from the smallest balance to the largest and making minimum payments on all debts except the smallest one. Interest rates aren’t considered unless two debts have the same balance; in that case, list the one with the higher interest rate ï¬rst. Ramsey believes that eliminating smaller debts gives you quick feedback, builds momentum, and reinforces your commitment, making it more likely that you’ll stick with the plan.

To pay down her bills, she trimmed excess items from her budget and downsized to a smaller apartment. She also worked part time at Macy’s, provided babysitting and house cleaning services, and participated in paid studies to earn extra cash. Her efforts literally paid off: She eliminated her credit card debt in nine months and within 34 months paid off her car loan.

What’s more mind-blowing is that shes is amping up her debt-elimination efforts and moving her target “freedomâ€ date up 18 months to June 2013.