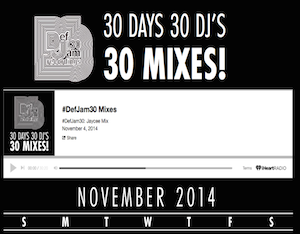 With us only four days into November, it seems that the celebration for Def Jam Records’ 30th anniversary is in full swing.

After blowing the roof off of Barclays Center in Brooklyn, N.Y., with all-star performances by DMX, Ja Rule, and other Def Jam legends, the ongoing jamboree continues in the form of a partnership with RESPECT Magazine and iHeart Radio.

Each day will find a different DJ remixing selected cuts and aired and stored on iHeart Radio’s Def Jam channel, so fans both new and old can re-listen to their favorites over and over again. RESPECT will support the initiative socially by driving audiophiles to the splash page on iHeart Radio’s Def Jam channel. Featuring editorials written by the RESPECT EIC, Datwon Thomas, listeners will have a chance to read first-hand accounts from one of the industry’s most brightest scribes.

“RESPECT Magazine recognizes the rich history of Def Jam Records and the mighty influence it has had on Hip-Hop culture,” said Thomas. “Although Def Jam has led the way in providing the blueprint for the music, they have also shown us how to walk, talk, wear and view life through their lens. This astounding project, featuring the game’s top DJs, is a collaborative effort of honoring the enormous contributions of the label.”

With Hip-Hop fans just two weeks removed from that ultimate party event at Barclays Center, Def Jam has had a host of content come out to celebrate their triumphant mark in Hip-Hop and music culture. From the hallowed halls of Rick Rubin’s dorm at New York University to your audio listening devices, Def Jam Records continues to dominate the conversation about what’s hot in Hip-Hop culture and innovation.