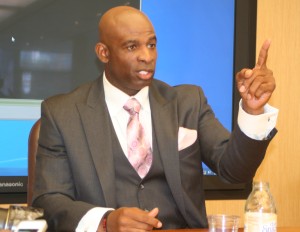 As the Oprah Winfrey Network prepares to air the next season of “Deion’s Family Playbookâ€ on Saturday, Nov. 1, Sanders took time out to speak to a select group of journalists about the direction of the show this season.

“Deion’s Family Playbook,â€ was the highest rated freshman docu-series in OWN history as the cameras followed Sanders, a single father, raising 10 kids with the help of his girlfriend, Edmonds Entertainment’s Tracey Edmonds and his mother, Connie.

Sanders stresses the importance of the upbringing of his children and being an example for them. To be present in their every day life, ‘To keep them grounded, is to show them a grounded father. When they can see me walk around the school, when no one is looking and picking up trash and doing the things that don’t get much fanfare, it allows them to understand that this life is real.’

He moves his family to South Dallas since he got a great offer to sell his house and the move puts him closer to his school, Prime Prep Academy, where is he the head football coach and founder. Sanders says, “We try to facilitate those kids, we try to instill different things inside of them. That’s the challenge, that’s the calling that we have, to help these kids get to it through college and instill values in them.”

The show will also explore his relationship with Edmonds, the controversy surrounding his school, Prime Prep Academy, which he had to restructure and how his kids and family copes with the move and having the cameras around them. Sanders wants to make sure that you know that he is who he is and he doesn’t change when the cameras turn on.

‘We just really want a brand that people can turn on and watch as a family, that’s the main thing. I want you to be able to sit down with all your kids and be able to watch the show and everyone pull something out of it!’

Well, I can continue to tell you what he said in terms of what goes on in the show, but, you’ll have to tune in yourself starting Nov. 1 at 9 p.m. on OWN.