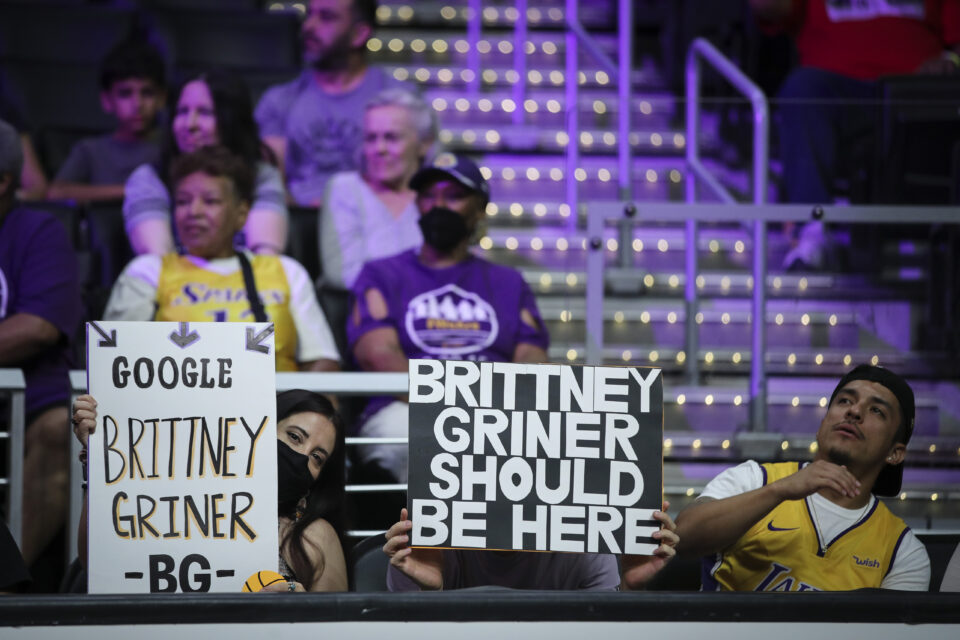 LOS ANGELES, CALIFORNIA - JULY 04: Fans hold signs referring to Brittney Griner of the Phoenix Mercury, who has been detained in Russia for more than four months on drug charges, ahead of the game against the Los Angeles Sparks at Crypto.com Arena on July 04, 2022 in Los Angeles, California. Griner has been detained in Russia since February. NOTE TO USER: User expressly acknowledges and agrees that, by downloading and or using this photograph, User is consenting to the terms and conditions of the Getty Images License Agreement. (Photo by Meg Oliphant/Getty Images)

The WNBA’s elite honored Phoenix Mercury center Brittney Griner, who has been detained in Russia since February on drug charges, at the WNBA All-Star Game on Sunday.

In the second half of the game, all WNBA players wore Griner’s number 42, showing their support for the detained All-Star. Many players also talked to Griner’s wife and recent HBCU graduate, Cherelle Griner, who attended the game and sat courtside.

Wilson told the New York Times that sporting the jerseys with Griner’s number was “a statement in itself.”

“We are not going to stop until everyone understands how serious this really is,” Wilson added.

Griner, a seven-time All-Star and WNBA champion, was playing for UMMC Ekaterinburg, a Russian pro team she plays for during the winter, when she was arrested. Authorities found hashish oil in her luggage at an airport near Moscow. Last week, Griner pleaded guilty to the drug charges, but according to the New York Times, she has not been formally convicted. The WNBA star faces up to 10 years if convicted.

Many WNBA players, like Griner, play overseas during the WNBA’s offseason, receiving better pay and more notice. However, according to WNBA Commissioner Cathy Engelbert, Griner’s experience is leading more American-born players to stay home or sign with teams in other countries besides Russia.

WNBA players are allowed to play overseas during the off-season but face fines if they are late for training camp for their WNBA teams, a common occurrence due to international travel schedules. Players can be barred from league competition if they are not back in time for their WNBA season beginning next season.