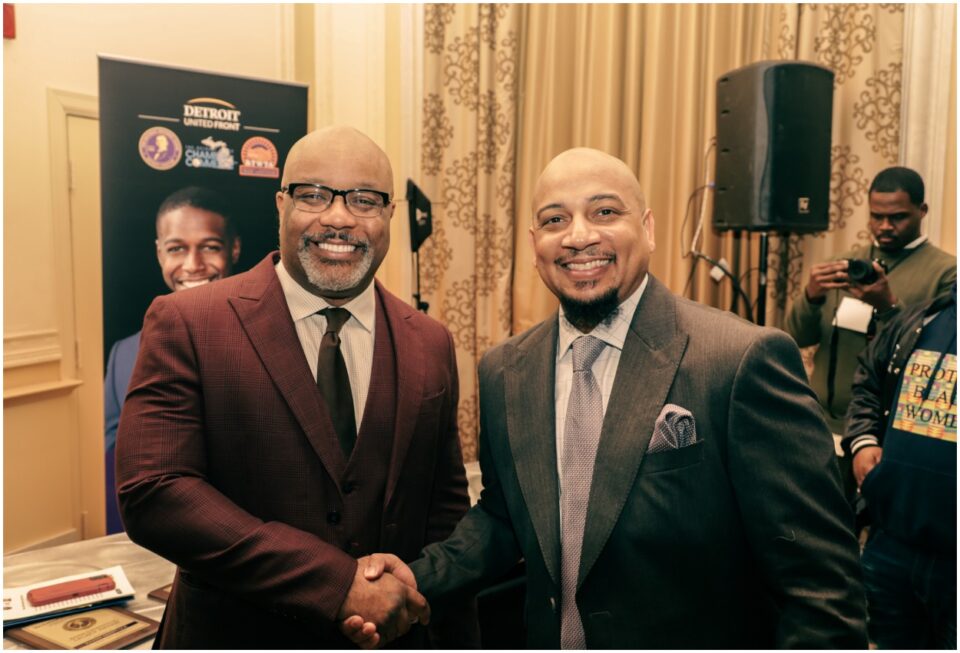 The summit and press conference took place to announce new leadership and coming together as the Detroit United Front and addressed the current state of Black business in Detroit, including the lack of support and resources that Black businesses receive from the philanthropic, public and private sectors as well as the systemic, institutional and structural neglect and exclusion of Black businesses. World-renowned speaker and scholar, Dr. Boyce Watkins, Ph.D., founder, and CEO of Boyce Watkins Enterprises, served as the summit’s keynote speaker, according to a press release.

According to Forbes, “Detroit has one of the highest poverty and economic inequalities rates in the country, and one of the ways to address poverty and inequality in an 80% Black city is to support Black businesses and entrepreneurship. Black businesses should be the number-one employer of Black people,” said Chad Rhodes, Detroit entrepreneur and real estate professional.

Due to the severe impact of COVID-19’s economic shutdowns in the city of Detroit and the state of Michigan, as well as the country’s racial unrest ignited by the unarmed murders of Black men and women, which sparked the global Black Lives Matter Movement in 2020, corporations made a plethora of grandiose announcements, unfulfilled commitments at numerous press conferences, appeasing platitudes and Black racial equity promises, but most companies have failed to deliver measurable results and must now be held accountable. No real economic advocacy in Detroit’s present political climate is holding the philanthropic, public and private sectors accountable for such flagrant negligence and for reneging on commitments made to the Black community, which is unacceptable. Something must be done to help Black businesses not just survive but to sustain and thrive in the marketplace.

“As a successful Black business owner in the city of Detroit, it shouldn’t be difficult to find support and resources to address the wants and needs of Black businesses, but garnering access has been extremely difficult and cumbersome. I can’t imagine what the experience is like for those needing to be hand-held through the process,” said Dr. Cecil Forbes, founder, owner and operator of iCare Spine and Rehabilitation Centers, PLLC.

In the city of Detroit, according to the 2019 census, there are more than 49,000+ Black-owned businesses out of a total of 62,000+, accounting for 80 percent of all small and medium-size firms. Even though Detroit is ranked 5th in the country for Black business formation and 1st in the country for Black women entrepreneurship, institutional hurdles, economic inequities and exclusion continue to persist. Despite having an 80 percent Black population, 80 percent of small firms are locked out of city contracts, the private sector lacks adequate supplier-diversity programs to provide Black businesses with contracting and procurement opportunities, while banks and lenders fail to lend to Black business owners at an alarming rate, further increasing the significant disparity gaps in access to capital.

“It is unacceptable that [in] a city that has a supermajority Black population around 79 percent and a supermajority of small businesses [of] 80%, that Black businesses can’t access capital or ecosystems that provide resources. Detroit needs new leadership at the table that will move the needle forward, producing measurable results in the community,” said Dr. Danielle Cato-Benson, founder, and chief executive of the HealHER Virtual Spa and 1:11 The Collective mental health resorts.

This was a historic time in which three top Black business organizations joined forces to speak out against the ongoing benign neglect of Black businesses by the philanthropic, public and private sectors. The Detroit United Front will provide much-needed, real and independent representation to serve as a true economic advocate for Black businesses in the city for those who may not have a voice while simultaneously holding the systems, institutions and structures perpetuating lack of equity and exclusion accountable.

Most of the next generation in the Black community wants to own their own businesses and make their own money, providing them the economic freedom their parents and grandparents did not experience working for someone else. Entrepreneurship will be the jobs of the future in the Black community,” said Bartel Welch, CEO of Red Diamond Digital and executive director, CODE313.

Crystal L. Gunn, founder, and CEO of the Amazing Woman Network, stated, “These times call for unprecedented leadership and new voices at the old table, or by creating a table of our own. Insanity is doing the same thing repeatedly and expecting different results. Time to disrupt the insanity that produces no results for Black businesses.”

Booker T. Washington once said, “The world cares very little what you or I know, but it does care a great deal about what you and I do.” It is time for the Detroit United Front new leadership to carry on that legacy and to frame the Black business agenda for the city of Detroit,” stated Orena Perry, owner of JEADL Enterprises, LLC.