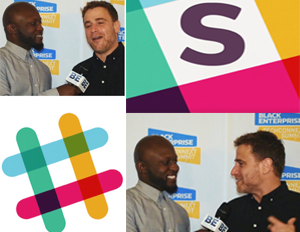 As the old adageÂ says “There is no ‘I’ in Team” and today’s teams just do not communicateÂ through email, text messaging, or phone calls; they use cloud-based team collaborationÂ tools to be more efficient.

For over three years, Slack Technologies (Slack) has enabled teams to communicate through group messaging and in 2015–after the acquisition of Screenhero–voice, video, and screen sharing were added to the platform. Just to be clear, this is not an app review of Slack but a personal conversation with the founder of Slack known as Stewart…Stewart Butterfield that is 🙂

In the video below, Black Enterprise captured three #digitalGrace moments of Butterfield that includeÂ the love of jazz standards, responsibilities with charted growth, and a new way to share, “I’ll be back in 20 minutes,” using Snapchat.Â 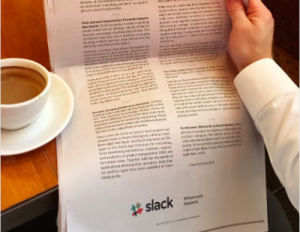 Earlier this month Slack posted an open letter to Microsoft concerning its new group chat software Teams. In what some would call a “digital showdown,” it was very calm. Slack posted the open letter online viaÂ slackhq.comÂ and showed that it can drop “serious coinage” by taking out a full-page New York Times ad. Now that is showing one has series “guap” … nice Stewart!

The most important message Slack conveyed to Microsoft in welcoming the software giant to the team messaging market is, “First, and most importantly, it’s not the features that matter. You’re not going to create something people really love by making a big list of Slack’s features and simply checking those boxes. The revolution that has led to millions of people flocking to Slack has been, and continues to be, driven by something much deeper.”

Well, Stewart, I must say you have surely dropped #lemonade “BeyoncÃ©-nomics” style to let the universe know–Slack’s $2.8 billion valuation was not made possible just on tech alone. That it materialized because you and your team listened to the market and consistently deliver a platform end-users love day in and day out, and that is one of the “secret sauces” to Slack.