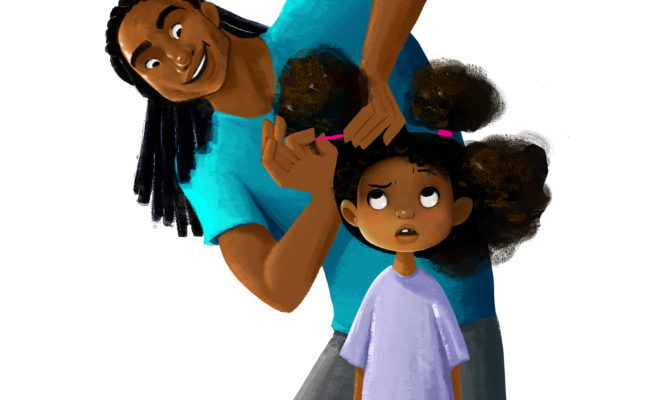 Director Matthew Cherry, who is known for his strong animated GIF presence adding multitudes of color to Twitter’s social media chatter, recently released a Kickstarter campaign in efforts to provide more African American representation in mainstream animated projects and to shine a light on positive black father-daughter relationships through the usage of black hair.

“This story was born out of seeing a lack of representation in mainstream animated projects, and also wanting to promote hair love among young men and women of color,” states Cherry in a recent press release. “I’ve been thinking about this project for a couple of years now, but it wasn’t until I started coming across a lot of viral videos online of black fathers interacting with their sons and daughters that I finally had the confidence to try and make this a real thing.”

He adds, “You don’t see the black family dynamic that often in mainstream animated projects. I hope that this film will help change that.”

The Use of Technology

Traditionally, it has been extremely difficult for film directors of color to get these types of projects funded. Cherry circumvented the traditional studio route by tapping into tech. His platforms of choice for fundraising, a combination of Twitter and Kickstarter.

“To me, Kickstarter was very crucial because it’s a well-known, trusted, reputable way, to raise money and crowdfund online,” Cherry told Black Enterprise. “Had I just been doing this through my email contacts and telling people to PayPal us money, it wouldn’t have had the same legitimacy.”

So how did he drive the audience to the campaign? Twitter. Cherry has an extremely active presence on Twitter with many of his tweets going viral.

“Since Trump got elected, I decided I couldn’t be silent anymore. I was always active on social media, but I wasn’t that opinionated. With Trump becoming president, that was the first time I was completely opinionated and really didn’t care what people thought about my opinion, either you got it or you didn’t,” says Cherry.

“What was interesting is that those tweets started getting a lot of love and going viral. That helped me build a following over the past seven or eight months. August of last year, I had 30,000 followers and now I have over 74,000. Not having the platform of Twitter, doing this campaign the way we’ve done it would have been impossible. Sometimes, a retweet can be more powerful than money. You never know who’s following who.”

So what exactly can we expect? Well according to the description on the Kickstarter campaign, Hair Love, is a 5-minute animated short film that centers around the relationship between an African American father, Stephen, his daughter, Zuri, and her hair, as stated in a recent press release. Despite having long locks, Stephen has been used to his wife doing his daughter’s hair. So when she is unavailable right before a big event, Stephen will have to figure it out on his own. This sounds simple enough, but we soon come to find that Zuri’s hair has a mind of its own.

In addition to his own talents, Cherry is bringing together an all-star squad to help bring this project to the screen. The crew includes, Co-Director and 3-D artist Jason Marino, who created the very well-crafted short film, Tamara; Character Designer Vashti Harrison, who is responsible for the beautiful 2-D designs seen below, and Executive Producer Peter Ramsey from the DreamWorks feature-length, animated film, Rise of The Guardians, just to name a few.

So far Cherry has raised over $160,000 for the film with celebrity supporters and backers including Gabrielle Union, Ben Stiller, Gina Rodriguez, and Gabby Sidibe, who all have discovered and shared the campaign via Twitter with their millions of followers.

“I think technology is amazing because it connects you to people that you would never have met in person. In terms of the cultivating an audience online and being able to tap into them directly, tech was super crucial and contributed heavily to the campaign going viral.”

If you are interested in contributing to this much-needed film project, click here. There are tons of great perks including producing credits, Hair Love children’s books, and even your very own Zuri doll.