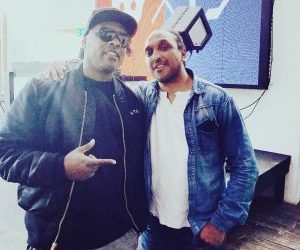 Recently, DJ Jazzy Jeff released a new project, Chasing Goosebumps, but the only difference this time around was that it was super technology centric.

“Not only did we decide to make the project in seven days, we livestreamed the entire process for people to see–from the mistakes to the late night sessions to figuring things out–and it was probably the most fulfilling thing that I’ve ever done,â€ said DJ Jazzy Jeff.

DJ Jazzy Jeff sat with the CEO of Smashd, James Andrews, during SXSW Interactive at the Twitch/Reddit House to discuss the new ways music is being produced and distributed.

“We released this project through a company called Stem,â€ said DJ Jazzy Jeff. “They are basically a company that can collect royalties from off of YouTube. When they explained it, it was very interesting. Afterward, we sat down and I spoke to them and they said they also can do basic distribution and get it to all the platforms and that really intrigued me because it was a level of transparency that does not exist in the music industry.â€

There are so many innovative ways to go about the process of producing music that the power has now reverted from the record label’s hands directly to the artist/producer. With companies like Stem, who claims to “make it easy for everyone involved in the creative process to get paid their share of earnings in a clear & timely manner” and unlimited access to distribution vehicles, it will be interesting to see how record labels adapt, innovate, and survive in this technologically driven landscape.

Watch the clip from the interview below:

Smashd CEO, James Andrews and DJ Jazzy Jeff explain how technology is changing the barriers to entry in the music industry. Long gone are the days of waiting for a label to put your work out.