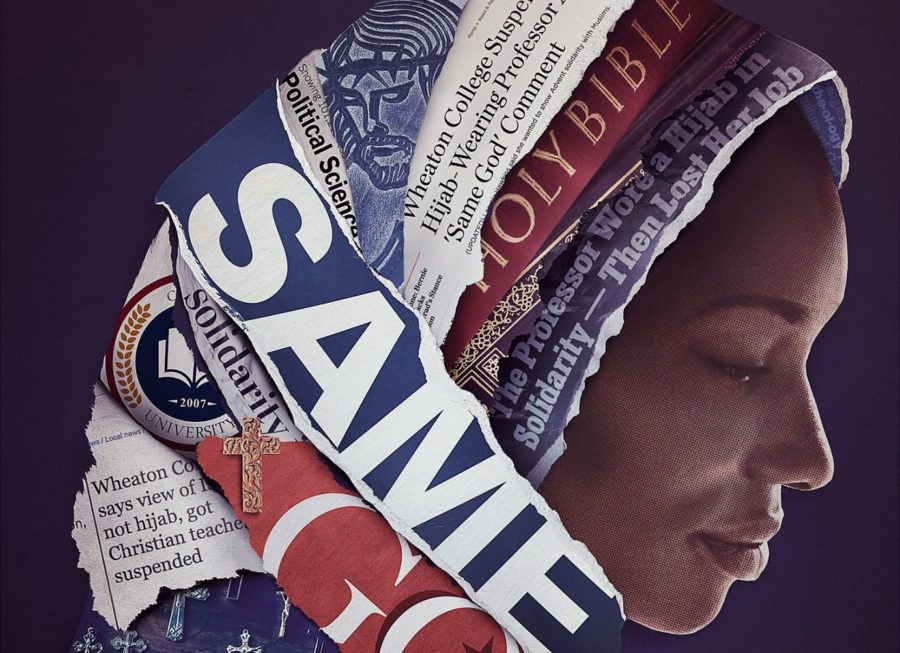 Desperate for something to talk about during your virtual happy hour other than quarantines, curfews, COVID-19, and Tiger King? Consider Same God, a timely documentary screening virtually on Sunday, April 5, with a talk-back featuring the film’s subject and director–both black women with fascinating stories to share.

The film takes its name from a December 2015 Facebook post in which Dr. Larycia Hawkins, a political science professor at Wheaton College, wrote, “I love my Muslim neighbor because s/he deserves love by virtue of her/his human dignity….we worship the Same God.”

It was a personal response to escalating political rhetoric against Muslims– particularly during that year’s presidential campaign–and Hawkins, who was raised a Baptist, included a photo of herself in a hijab.

She was swiftly suspended by the 160-year-old Christian school outside of Chicago, which was founded by abolitionists and is said to have been a stop on the Underground Railroad. In early 2016, she was stripped of her tenure, a stunning, potentially career-ending blow. The implications of the move were intensified not only by Hawkins’ stature as the college’s first black woman to earn tenure, but as one of an abysmal number of black tenured female professors nationwide. According to Catalyst, black women represent 2.3% of all tenured professors in the United States.

Hawkins’ experience at Wheaton thrust her into the national spotlight and a sort of academic limbo. “Honestly, I am not sure that I will ever have tenure in the conventional sense,” says Hawkins, who is currently in a non-tenure track faculty position at the University of Virginia. “I have not given up on that as a goal, but the job market has changed dramatically… and the holy grail of tenure is an increasingly scarce commodity.”

Perhaps a bit harder to swallow has been the trauma’s impact on her health. “As my personal, academic and spiritual integrity were deconstructed in front of the world, I lost a lot of weight,” she recalled. “I could not write and could scarcely read dense academic books… Sleeping was difficult. As an academic who was not teaching or writing, I felt like a failure. I fell into a dark hole of depression…and I sought help. Therapy. Medications. Babies. Puppies. Seeking life and beauty have helped.”

However, Hawkins is quick to note that her career challenged the sanctity of her health even in the best of times.

“Black women in the academy already bear the epigenetic scars of slavery, but we also bear the burdens of carrying our community with us, of telling the man how he’s racist, of teaching the children, and of serving on committees to make sure all of the aforementioned are done—all this in addition to teaching and publishing and living and breathing,” Hawkins said. “My doctor and I watched with horror as my blood pressure peaked, as anxiety emerged, and on and on—all related to my service in the academy. This was BEFORE all the stuff hit the fan with the viral Facebook post.”

In a July 2019 article in the Chronicle of Higher Education, newly tenured UVA professor Marlene Daut wrote about her own experience on a parallel track. “To say that my time as an untenured black female assistant professor was emotionally traumatic would be an understatement,” Daut wrote, “I could fill volumes with tales of both the macro- and microaggressions launched by students, professors, and administrators alike.” Daut’s promotion brought the number of tenured black women professors in UVA’s College of Arts and Sciences to three.

While Hawkins says she had “little bandwidth mentally to produce scholarship” in the wake of the events at Wheaton, what she never wavered in was her willingness to openly reflect on the choices she made almost five years ago

Winner of the Jury Award for Best Documentary at the Bentonville (Arkansas) Film Festival, Same God shares Hawkins’ story while exploring the ongoing polarization taking place across the country over issues of race, Islam, religious freedom, and Donald Trump.

“The vitriol and hatred that are center stage in our society and in politics today were extant back in 2015, but people failed to see it, or they saw it and dismissed it,” says Hawkins. “This happened on our watch. Injustice of every ilk was lurking at our door back then. It is in our house now, and you let it in. Yes, you.

“At the very least, I hope that the film will motivate people to do the soul work that it takes to stand up for self and neighbor when the forces of destruction show up on your doorstep,” Hawkins adds.

Noting that in an election year when our country remains as divisive as ever, Linda Midgett, the two-time Emmy-award winner and Wheaton alumna who produced and directed “Same God,” said she hopes the film “encourages tolerance, understanding and dialogue, especially on the topics of religious freedom and academic liberty.”

To register for the April 5 screening and talk-back, click here.

To view the trailer for Same God, and learn more about the film, please visit www.SameGodFilm.com and Facebook.com/SameGodFilm.