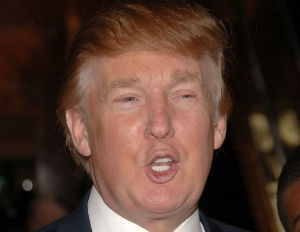 On Thursday Buzzfeed’s McKay Coppins reminded everyone about that time Donald Trump thought it would be a good idea to have an entire season of The Apprentice dedicated to assessing the superiority of two racially segregated teams ofÂ  black and white professionals.

As flagged by Coppins, Trump announced the idea of pitting two races against each other on his radio show in July of 2005.

â€To be honest, I wasn’t particularly happy with the most recent season. So this time around, I wanted to do the casting myself,â€ Trump said.

The Republican party’s presidential nominee then proceeded to share that he had recently had â€an idea that is fairly controversial — creating a team of successful African-Americans versus a team of successful whites. Whether people like that idea or not, it is somewhat reflective of our very vicious world.â€

Apparently Trump had also mentioned his plan, which Slate appropriately dubbed “a literal battle of the races,” on the Howard Stern show.

At the time, Trump acknowledged that â€not everybody thinks it’s a good idea.â€

Last month a group of former Apprentice contestants made headlines when they convened in New York city to speak out against Trump’s presidential bid.

Dr. Randal Pinkett, the only person of color to ever win The Apprentice, was in attendance.

“We acknowledge Donald’s success as a businessman, and genuinely appreciate the opportunity The Apprentice afforded all of us,â€ said Dr. Pinkett. “We, however, strongly condemn Donald’s campaign of sexism, xenophobia, racism, violence and hate.â€