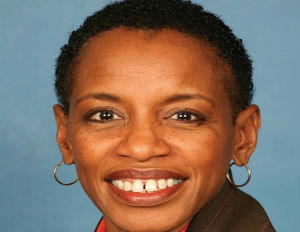 Today the voters of Maryland have the chance to make history. IfÂ  Donna Edwards wins today’s primary, she will be only the second black woman elected to Senate.

Edwards, 57, is a congresswoman representing Maryland’s 4th district. Known as an outspoken liberal firebrand, her commitment to progressive issues has earned her the national admiration of grassroots activists.

She is a proud, vocal black woman. And she doesn’t care if you don’t like it.

“When I began this race I decided that I was going to run as who I am: I am a black woman. There is no hiding that, nor would I want to,” Edwards has said.

Edwards is a single mother who supported herself and her son while earning her law degree. “I raised my son since he was 3, mostly on my own. I know what it means to pay a dollar a minute for overtime for your childcare. I know what it’s like to juggle your rent and your electricity bill. I was one of the ones who didn’t have enough for groceries after paying for daycare. Sometimes I went to a local food pantry to get what I needed,â€ Edwards has said.

Once, she was forced to skip a mortgage payment so she could pay for therapy to treat her son’s learning disability.

After drafting and fighting to enact the 1994 Violence Against Women Act, Edwards continued to work for progressive organizations before her election to congress. Once in office, she secured funding to increase the availability of food programs in public schools, and fiercely advocated against cuts to Social Security.

Edwards’ opponent in today’s primary, Rep. Chris Van Hollen, is a well-liked establishment dealmaker. He is close to embattled Chicago mayor, Rahm Emmanuel, and was handpicked by Nancy Pelosi as the ranking member of the Budget Committee.

The son of diplomats, Van Hollen has been described as “born to the job” of a US Senator.

In comparison, Edwards had been called “difficult to work with“, “part of the problem,” and “aloof.”

While some would point to the obvious presence of the racial undertones in the messaging used to characterize each candidate, Edwards has found few allies among her own.

As BlackEnterprise.com previously reported, the Congressional Black Caucus turned its back on her, as did the caucus PAC. In a race where Van Hollen had raised a total of $8 million to Edwards’ $3.36 million, the CBC PAC refused to endorse her and contribute financially to her campaign.

Multiple reports have pointed to Al Wynn as the source of the CBC PAC’s abandonment of Edwards. In 2008 Edwards took Wynn’s congressional seat, and it seems he has never forgiven her for his humiliating defeat.

We will have lost a chance to make history. The good kind of history.

Regardless of today’s outcome, it is our hope that this election brings aÂ renewed effort to elect more women of color to office, with an increased focus on what we are doing to help get them there.