Don't Miss Your Appointment For "Barbershop: The Next Cut" 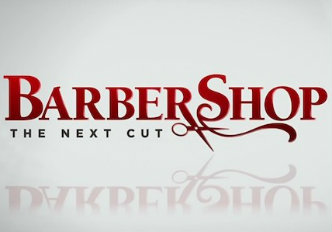 It’s time for a shape up! Not at your local barbershop, but at the movie theaters with Barbershop: The Next Cut.

Most of the cast from the first two films areÂ back and it’s expanded with even more talent, including Common, Nicki Minaj, Regina Hall, and JB Smoove.

It’s been over 10 years since we visited Calvin’s Barbershop and several things have changed. Now, you can get a shape up and a touch up at Calvin’s because half of the shop is a salon. Calvin gained a partner in the business of hair–’Angie,’ Regina Hall’s character–and they share the same location.

In addition to old man Eddie’s wise-cracking hilarity and the antics of the other shop employees and customers, there’s a good deal of drama and suspense in Calvin trying to save his teenage son from the bad influences of a neighborhood that’s changed for the worse.

Barbershop:The Next Cut was developed from a screenplay by Kenya Barris and Tracy Oliver, based on characters created by Mark Brown, and directed by Malcolm D. Lee. The film is produced by Robert Teitel and George L. Tillman, Jr., and executive produced by Ice Cube, Malcolm D. Lee, Becki Cross Trujillo, Ronald G. Muhammad and Jeff Kwatinetz. The film’s score is composed by legendary jazz artist Stanley Clarke.

Barbershop:The Next Cut is rated PG-13 and slated for release today. Here’s what some of the cast and crew had to say about the film.

“It’s great to be part of a franchise that people love and that pushes the envelope in a lot of ways; to merge good storytelling and movie magic with reality and what’s really happening out there. When you have characters like Calvin and Eddie, you want to come back to them. You want to play them again. They resonate with audiences and, as an entertainer, I just think it’s smart to give fans a chance to revisit characters they’ve come to know and love.â€

“She’s an adult now. In the beginning she was off the handle, angry all the time. Now she’s a woman with a husband, a stepson, and a 3-year-old daughter. She has evolved in a way I think is realistic. People who have seen the first and second movies will say, ‘OK, I get that. It makes sense.’ That’s why I loved the script and I’m happy to be a part of it.â€

“I was interested in the film because it’s Chicago-based and I like being involved in something that lets us talk about what’s going on there. It has heart and humor and something to say. Plus, I’m joining an all-star, championship team. I want to honor the people of Chicago and I take it very seriously that I get to represent where I am from and tell this story.â€

Nicki Minaj on her character Draya:

“She’s very sassy and very funny, and says whatever the hell she wants. [But] she’s so much more than meets the eye and that was important to me. [Director] Malcolm and I discussed it. If she was going to be one-dimensional, I didn’t want to do it. I wanted her to be multifaceted, so that one minute she’s twerking and the next minute she’s talking about what she thinks of the president. And that’s what I love about her.â€

Anthony Anderson on his character J.D.:

“J.D. is on his grown man now. He’s been released from prison and he’s turned over a new leaf. He’s got a food truck and a catering company called Gangsta Grub and, on the surface, it looks like he’s back up to his old tricks. But in reality he’s in the community giving second chance opportunities to people who wouldn’t normally get them. And that’s how J.D. has changed.”

Regina Hall on her character Angie:

“Angie is Calvin’s partner–the barber shop is now a unisex shop. She keeps trying to get him to change the shop’s name to Calvin and Angie’s, but she hasn’t achieved that yet. She’s in charge of the ladies’ side of the shop, she used to run her own. And she’s literally there with Calvin when everything is going down. She’s very instrumental in making sure that everything works out like it’s supposed to and that they’re able to make a difference.”