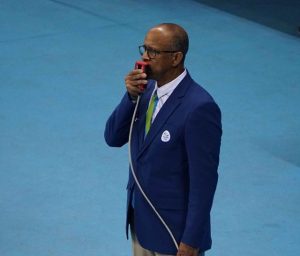 Last week, the USA Swimming Foundation announced that Dr. Cecil Gordon, an obstetrics doctor based in Wilmington, Delaware, made history, as the organization’s first African American member to serve on its board of directors.

Gordon, who is a longtime USA Swimming official, served as a starter officiate during the 2016 Olympic Games in Rio de Janeiro. According to the USA Swimming Foundation, he has officiated three previous U.S. Olympic Team Trials and several high-level international meets including the 2015 FINA Championships in Kazan, Russia. The volunteer has also officiated many U.S. National Championships and Open Water Trials. Recently, he served as chair of the Safe Sport and National Diversity Inclusion Committees.

Through his directorship, Gordon’s goal is to add more diversity to the swimming pools and encourage more people to learn how to swim and reap the benefits of the sport. After stating that he is “absolutely thrilledâ€ to have been selected as a director, Gordon stressed the importance of swimming in an email interview with BlackEnterprise.com.

“In this country, ten people drown daily. Most of this tragic loss of life occurs simply because the victim has never learned to swim,â€ he said. “The minority community is disproportionately represented in far too many of these preventable deaths.â€

A recent study commissioned by the USA Swimming Foundation and conducted by the University of Memphis found that nearly 70% of African American children and nearly 60% of Hispanic children have low or no swim ability, compared to 40% of Caucasians, putting them at a higher risk for drowning.

“I welcome the opportunity to work to improve those numbers,â€ Gordon said.

A study by the U.S. Consumer Product Safety Commission revealed that, between 2011 and 2013, the annual average number of drowning deaths of children aged 0-14 in pools was 390. In 2014, Florida and California had the most drowning deaths of children younger than 15, with 50 and 36, respectively, and 75% of those deaths occurred at a residence. The study also found that African American kids between the ages of five to 19 are five and a half times more likely to drown in a pool than white children within the same age range.

Gordon noted that these stats are why everyone should learn to swim.”Swimming is the only sport which is also a lifesaving skill,â€ he said. “It’s a life skill which a person can continue to enjoy for the duration of his/her life.â€

He added that the benefits of exercise and improved health, which result from swimming regularly, is another vital reason to learn. Anyone interested can attend a local USA Swimming Club or local YMCA. The main thing Gordon noted was the importance of remaining committed to it.”It is essential,â€ he said.

On adding more diversity to the swimming pools, Gordon stated that it is vital to obtain it at all levels. “In the world of swimming, where diversity has been absent historically, increasing diversity introduces the sport to a new pool of potential talent. In the most recent two Olympics, we have seen athletes of color start to make their marks in swimming and in gymnastics,â€ he said. “However, in order for swimming to fully appreciate the benefits of diversity, it must be attained at every level of the sport[…] the board, the staff, the coaches, the athletes, and the local volunteers.â€