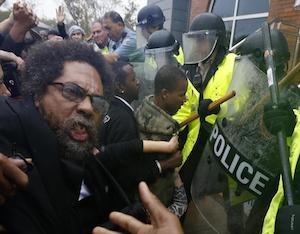 Civil rights activist and noted advocate against injustice, Cornel West, was among more than 49 people arrested at the “Moral Monday March” in Ferguson, Missouri.

According to journalist in the area whom tweeted the incident, the local police in St. Louis were wearing rain gear while arresting West, who was dressed in his typical black suit, tie and scarf. The police say that West and others were detained at the Ferguson Police Department for disturbing the peace.

“The protesters attempted to push through a constructed police line,” Shawn McGuire, a spokesman for the St. Louis County Police Department, said. A half-dozen people were also arrested at another site for blocking traffic and refusing to clear the street. Demonstrations have continued to demand the arrest of Officer Darren Wilson, a Ferguson policeman who killed Michael Brown and has yet to be brought in on charges.

West and his compatriots make up just a microcosm of the grander scope. There were protests in Webster Groves, demonstrations at a Ferguson Walmart, as a handful of arrests occurred at both. Sunday night before the arrest, Professor West spoke in front of 2,000 people who attended an interfaith rally. Anger continues to spill over after Michael Brown, 18, laid lifeless in the street for four hours and authorities did little to help.

“If you can see a dead black boy lie in the streets and that doesn’t make you angry, you lack humanity,” a woman, speaking under anonymity, told the crowd.