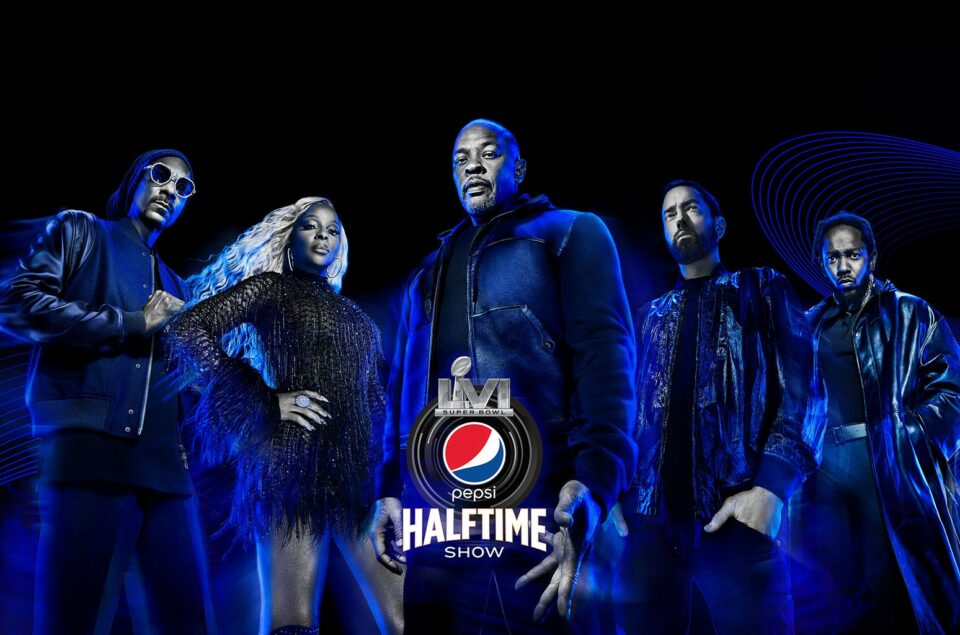 Next year’s National Football League championship will be a “super” one with the scheduled halftime performance!

The NFL has announced a powerful star-studded lineup that has shocked and pleased music fans around the world.

Pepsi, the NFL, and Roc Nation have put together a musical lineup that is sure to have non-football fans tuning into Super Bowl LVI on Sunday, Feb. 13, 2022. The Pepsi Super Bowl LVI Halftime Show lineup will include Dr. Dre, Snoop Dogg, Eminem, Mary J. Blige, and Kendrick Lamar. Next year’s championship event will take place at SoFi Stadium in Inglewood, California, and will be airing on NBC, Telemundo, and streaming live on Peacock.

“On Feb. 13., 2022, at the Super Bowl LVI in Inglewood, CA, in the new SoFi Stadium, Dr. Dre, a musical visionary from Compton, Snoop Dogg, an icon from Long Beach and Kendrick Lamar, a young musical pioneer in his own right, also from Compton, will take center field for a performance of a lifetime, said Shawn “JAY-Z” Carter in a written statement.

“They will be joined by the lyrical genius, Eminem, and the timeless Queen, Mary J. Blige. This is the Pepsi Super Bowl Halftime Show. This is history in the making.”

The Pepsi Super Bowl LVI Halftime Show marks the first time these impactful artists will perform together on stage. These five artists have been awarded a combined 43 Grammys and have created 22 No. 1 Billboard albums.

“The opportunity to perform at the Super Bowl Halftime Show, and to do it in my own backyard, will be one of the biggest thrills of my career,” said Dr. Dre. “I’m grateful to JAY-Z, Roc Nation, the NFL, and Pepsi as well as Snoop Dogg, Eminem, Mary J. Blige, and Kendrick Lamar for joining me in what will be an unforgettable cultural moment.”

Pepsi and the NFL are also supporting the launch of Regional School #1, a magnet high school in South Los Angeles that is set to open for students next fall as part of the LA Unified School District. The high school is based on the USC Iovine and Young Academy, which was founded by Jimmy Iovine and Andre “Dr. Dre” Young. The school will offer a unique educational model focused on Integrated Design, Technology, and Entrepreneurship.