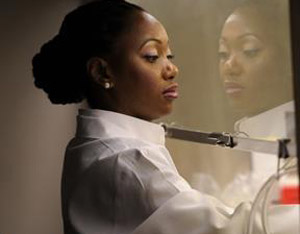 Strides are currently being made in cancer research thanks to the contributions of Dr. Hadiyah-Nicole Green, one of less than 100 black women physicists in the U.S. An assistant professor at Tuskegee University, Dr. Green was recently awarded a $1.1 million grant to develop a cancer treatment involving lasers and nanoparticles.

In an interview with AL.com Green spoke of her recent achievement, stating, “It looks like I’m special, but I’m not. I’m no different from anybody else,” she said. “When opportunity found me, I was prepared.”

What’s special about Dr. Green is that she has a personal connection to the cancer research she’s conducting. She lost both her mother and father to the disease and later her uncle was diagnosed. After watching her uncle go through chemotherapy and radiation, Dr. Green was inspired to innovate. She came up with the treatment-altering idea of using lasers to treat cancer to avoid the same side effects that are associated with chemotherapy and radiation.

According to AL.com, the way the technology works is that an FDA-approved drug containing nanoparticles is injected into a cancer patient and causes the patient’s tumor to fluoresce (glow) under imaging equipment. The goal is for a laser to activate the nanoparticles by heating them.

“I’m really hoping this can change the way we treat cancer in America,” says Green. “There are so many people who only get a three-month or six-month survival benefit from the drugs they take. Then three or six months later, they’re sent home with no hope, nothing else we can do. Those are the patients I want to try to save, the ones where regular medicine isn’t effective for them.”

Though Dr. Green is not the first to propose the use of lasers and nanoparticles to treat cancers, she has been able to work out the kinks in parts of the technology that have been problematic like nanoparticle delivery and seeing success in living animals.

“As a physicist I’ve created a physical treatment that is not specific to the biology of the cancer,” says Dr. Green. “It’s a platform technology. It’s not cancer type—specific, though it can treat the cancer specifically. That’s a concept my friends who are biologists struggle with.”

Surely, this is only the beginning of the strides Dr. Green will make in her field and we’re already eagerly watching for what’s next.

To gather among hundreds of powerful women breaking ground in their fields, be sure to attend the 2016 Black Enterprise Women of Power Summit, March 6—12, at the Hilton Diplomat Resort & Spa, Hollywood, Florida. Register NOW!

For information on the 2016 Women of Power Summit, including sessions, speakers, and performers click here. Be sure to check back as updates are announced.