Drinking is the Job 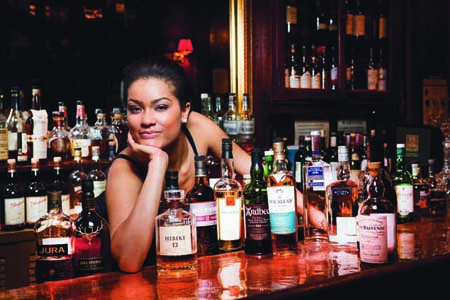 Financially strapped in the midst of the Great Recession and with one semester left to go to complete a bachelor’s in psychology at the University of Michigan, Detroit native Carmen Carroll better known as Carmen Operetta, returned to New York to bartend, a job she held many times before. Her passion and extensive knowledge of Scotch whisky later landed her a position as a brand ambassador, and this year she’s taking her expertise overseas.

Current position: Brand specialist/ambassador for Martin Miller’s Gin and part-time broker for the cherry brandy Heering and XantÃ©, the French cognac, products in the portfolio of Kindred Spirits Inc.

Former position: After working as a bartender for roughly a year at the trendy Manhattan restaurant Indochine, Carroll landed a position at the internationally known cigar and whiskey bar Hudson Bar and Books as a floor manager handling general operations of the New York City location in October 2008. Her duties included overseeing the training and service of bartenders, waiters, and waitresses; maintaining the high standard of customer service; and tracking inventory.

Unique expertise:
“Not only do I love and know a lot about Scotch whisky, I specialize in a particular region in Scotland called Islay (pronounced eye-la).â€ Off the west coast of Scotland, this island provides a unique smoky flavor profile. This level of knowledge impressed the president of Kindred Spirits, who is also a whiskey enthusiast. “We started talking whiskey and he was blown away that this Midwestern black woman knew so much about whiskey.â€

How she got the job:
Adept at developing relationships with customers and professionals in the spirits industry, she met Colin Appiah, brand ambassador for U’Luvka vodka, who eventually served as her mentor, and introduced her to David Bromige, co-founder and creative director for Martin Miller’s Gin. Three months after meeting Carroll in July 2009, he asked her to represent the brand in New York City. “He wanted someone who knew the industry, loved the brand, had a passion for what they were doing, and could represent the brand well in the city.â€

Typical day:
From 7 a.m. to 4 p.m. Carroll is sending e-mails, making phone calls, checking on clients, and introducing the brand to new accounts at bars, restaurants, and liquor stores, meeting with food and beverage managers in the day and bartenders and patrons at night. “People think that brand ambassadors just hang out at bars all night. We have very long days,â€ she says. “Many are former bartenders. You’re doing tastings and presentations. You have to make cocktails, but there’s also marketing, PR, and sales skills. Communication skills are important, and you have to be personable.â€

What’s next:
This month Carroll is moving to the United Kingdom to embark on a year-long tour of Scotland to study and research whisky. She will work as a sales rep for an affiliate company of Kindred in hopes of becoming its brand ambassador in Scotland. Islay, considered a tourism destination for whisky, is also home to May’s Feis Ile–the Festival of Malt and Music, where Carroll will be a featured specialist. “It’s surreal to me at this point. I’m an African American woman from the Midwest who specializes in whiskey. I simply fell in love with what I do.â€