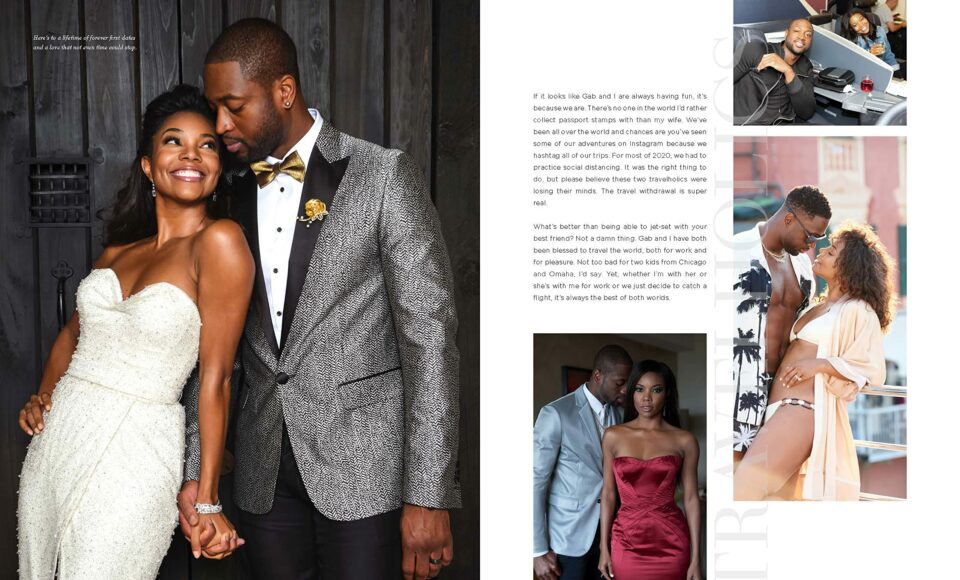 We first saw it in 2003, when Dwyane Wade led his underdog Marquette University basketball team to an upset victory over the Kentucky Wildcats, earning a trip to the NCAA Final Four. Later that year, Wade took his heart and grit to the Miami Heat where he led that franchise to three NBA titles, dazzling fans with his fadeaway jumper, steals, and blocked shots.

Today, nearly three years retired from the league, Wade releases his new book, Dwyane, a photographic memoir that documents his basketball career and his life as a father, husband, friend, and teammate. The book includes more than 200 never-before-seen color photographs from his personal photographer, Bob Metelus, who has documented Wade’s life in images for more than a decade. The book also includes text explaining the photographic moments, written by Justin Tinsley.

Recently, Wade sat down with BLACK ENTERPRISE to discuss his book, how he leads with love in raising his transgender daughter, Zaya, and how he respects his wife Gabrielle Union’s voice, even when she publicly divulged her pain in accepting that he fathered a child with another woman in 2013 during their break-up. The couple shared their vulnerabilities and humanity, hoping to help someone else along the way, Wade says.

BLACK ENTERPRISE: We all know you and Gabrielle Union are competitive. Did you write your book to compete with her?

Dwyane Wade: (laughing) Great question. We are very competitive, but I was working on my book before her. Hers came out before mine. I started working on this book in 2019 when I was in my last year of my NBA season. This was one of the things I wrote down to do to kind of wrap my career up. My wife wrote hers way quicker, way shorter time, she had some things she wanted to say to get off her chest (laughing).

Why was it important for you to share your story in this way–the photographic memoir?

For me, it was about the visuals of it. I wanted my supporters and the people who have followed me throughout my entire career to get an opportunity to see me in a different light. This book is not just all basketball, it’s a life book. And to me, I feel like pictures say so many things. When you have context and when you can read about a photo, a moment, when you can see the actual picture, it really gets you to understand a little more, so I had my photographer follow me for the last 10-11 years. I only had him put 200 photographs in the book. There’s many more where that came from. I just wanted to share. Like me and my wife, we do…we share our experiences.

You know what, I’m glad you said that because that’s exactly my answer. I wanted this book to show the human side.

You know playing the game of basketball on TV, you’re looked at as a superhero. You’re looked at as Iron man in a sense. I wanted people to see the human side of us athletes. I wanted people to see those intimate moments. I wanted them to hear about me being afraid and nervous at moments. Maybe even a few insecurities. I didn’t mind sharing that because we’re not all armored up and tough as we all claim to be. You know we have human moments.

What does a typical day look like for you now?

I wish I had a typical day. I wish I knew what a typical day looked like. I have so many different things going on, but if I could put it like this, I would say I have to make sure that my wife, my oldest son, Zaire, (and daughters) Zaya, Kaav–all of them get everything they need. All the attention they need, all the support they need, all the love they need. And then you know my wife has her own career, so I have to support her, be a supportive husband in her career and then I have to go off and try and build mine with all the things I’m trying to accomplish. So it’s never a typical day.

The book feels like one big thank-you letter to all of your friends and your family and your fans. What do you hope people take away from it?

When you first learned that Zaya identifies as a girl, what was your reaction? Did acceptance come immediately or was it something that had to evolve?

No, acceptance is never a question. Understanding is the biggest hurdle when it’s something you don’t understand. So, anytime I’ve never understood anything or never exposed myself, I try to go learn something on my own. Once I’m exposed to it, I get an understanding. So for me, the first thing I needed to do was try to go get an understanding of what Zaya was telling us, what Zaya was feeling, and so a lot of it is asking Zaya questions. A lot of it is reaching out to friends that have been in gay relationships and marriages for so long or ones that are not in relationships, ones that are single and out here trying to figure life out. It’s going on Google, getting on Zoom with Zaya’s therapist and doctors.

It really is doing what I would do for any of my kids. If Zaire came home and said, “I want to play baseball,” I’m going to go out and try to hire the best coach. I’m going to try to hire the best trainer. I’m going to try and get all the information I can on baseball to be able to educate him the best way I can. It’s no different when Zaya comes home and says dad, at 8, that I’m a gay boy and at 12, that I’m a transgender girl. It’s my job as a parent, as a facilitator, to go out and find the information so we can learn together and have conversations together about it.

This book was the first time I’ve seen you share photos of your youngest son, Xavier. And when I interviewed Gabrielle two months ago during the promotion of her book, she said that she probably would not have stayed with you if she was then the woman she is now, after learning you fathered a child with another woman after you two had broken up. When you read that, what was your reaction?

I think people expect you to have [a] reaction to everything someone says that’s not all perfect and all great. One thing I’ve always done with Gab is I’ve always supported Gab’s voice. I never have muted her voice. And her book was as honest as it can be. She was sharing her own personal experiences and how she felt. I can’t take that personal. Because it was her right to want to work on our family or not and she chose at that time to do it. And if she chose not to, you have to respect and understand it at the same time.

So, I always support my wife being her true self and speaking on past trauma in past relationships and past drama or whatever the case may be because it’s her story and it’s her truth.

How much of Shady Baby is you? The side eye, the expressions, the independence. Is this more your personality or Gabrielle’s?

I think we both see a little bit of both of us in her. I think face-wise everyone sees me.

Oh my goodness, she has your whole entire face.

It’s Face/Off. She literally has my whole entire face. But I think she has a lot of her mother in her, too. I think at home we get to see it more than the world. The world sees my face and says ‘oh she’s D,’ but no she’s Gab a lot.

Are you shifting into more of a mentor role now? In the book, I like the part about the relationship you described with [Utah Jazz star] Donovan Mitchell. Are you doing more of that now?

You know what, I’ve always done that. I think Donovan was one that became more public because of them saying we played alike and he became a young star in the NBA quickly, but I’ve always been in a space of mentorship because I know how important it was for me. Coming into this league, I didn’t know anything about it and it took the vets to teach me and put me on game so I’m always an open book. I’m always willing to put people on game and to–once again, just like my book–just sharing experiences and helping when you can. I’m not a coach in no aspects, but I’m a mentor and I love it.

Do you aspire to be a coach one day?

No. For me right now, I’m in my third year of retirement. I’m still trying to find myself. I know the things that are important to me at this point but I don’t know what’s going to be important to me in five years. I don’t know what’s going to be out there for me in five to 10 years, but right now, I’m very comfortable and very happy with all of the buckets that I’m trying to fill. And that’s enough for me right now.

Is there anything you’d like to add that I neglected to ask?

Dawn Onley is a freelance writer based in the Washington, D.C. metropolitan area.