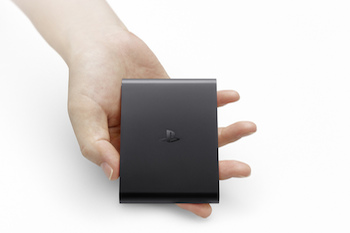 Monday, June 9, Sony held its press conference at the 2014 Electronics Entertainment Expo. Better known around the world as E3, gaming enthusiasts were waiting to get their hands on the latest and greatest from the Japanese multinational conglomerate.

The company celebrated its six-month-old domination in the home gaming console marketplace by championing new and exclusive titles such as Uncharted 4: A Thief’s End and LittleBigPlanet 3 at E3. With all the hype surrounding its games, Sony gave a little bit of insight to what’s new in its hardware department.

The company announced that it will bring PlayStation TV to the masses in North America and Europe this fall. The video-and game-streaming device will let users play video, older PlayStation titles, games, and potentially more from Sony’s handheld PS Vita system to any TV.

Dubbed the “micro-console,” the PlayStation TV will allow players to send any sort of action they want to a second TV for the price of $99.

As the gaming and tech juggernaut continues to place its foot on the neck of its competition, Sony is also launching the open beta of its cloud-based PlayStation Now service on July 31. Now, gamers will have the ability to stream classic games from Sony’s previous generation consoles onto the PS4, the PS Vita, Xperia cellphones, and Bravia TVs.

Since the next-gen console wars have concluded, Sony and Microsoft have been dueling for the number one spot. The former has come out swinging like Ali with 18.7 million units sold over Microsoft’s 11.6 million.