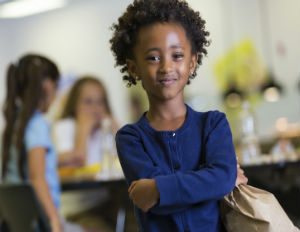 Part of the Brookings Institution in Washington, D.C., the Hamilton Project works to advance our country’s promise of opportunity, prosperity, and growth. It recently released 14 Economic Facts On Education and Economic Opportunity. Over the next several days, we will examine each of the 14 facts and their impact on your child’s education.

Fact 5: An additional year of schooling increases earnings and reduces the likelihood of an individual being unemployed, on welfare, or in poverty.

Measuring the direct effect of education on economic success is no straightforward task: Not only does education improve skills, but students with higher skill levels are more likely to pursue further education. In other words, the education wage premium can be attributed partly to selection (the tendency that students who go on to college already have higher levels of cognitive and soft skills) and partly to treatment (the direct impact of additional years of schooling). As a result, it would be incorrect to infer that giving a college education to someone who would have otherwise obtained just a high school diploma would cause his or her earnings to increase by the size of the gap between high-school-educated and college-educated workers.

However, research that isolates the causal impact of additional schooling does find that additional years of schooling improve outcomes. To isolate the effects of educational attainment on earnings, two researchers take advantage of changes to state laws governing minimum school-leaving age. As shown in figure 5 (below), one year of additional schooling lowers the probability of a student later being unemployed by 3.6 percentage points, of being on welfare by 5.5 percentage points, and of living below the poverty line by 8.1 percentage points. Among those working at least 25 hours per week, an additional year of compulsory schooling is associated with a 10.7% increase in annual earnings. These results may be understated because education earnings gaps tend to increase with age and these results focus only on younger cohorts.

Bottom line: What does this mean for your child’s education? To increase personal financial security, bet on more education. Talk to your children about how doing well in school usually correlates with doing well in life (financially). Point out to them that high salaries (and other aspects of financial security, such as homeownership) are a kind of reward for diligence in school. Expose them to positive role models who will affirm your message. 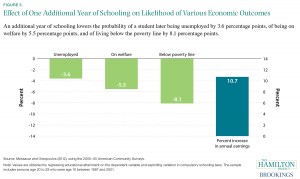