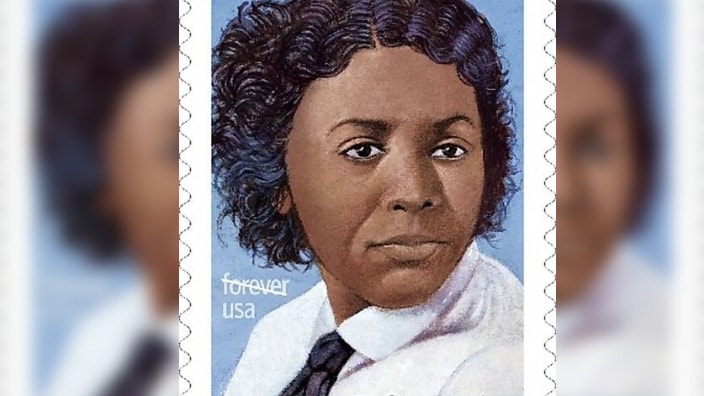 Historically, U.S. postage stamps were in use for nearly a century before Booker T. Washington became the first African American to appear on one.

Today, the Black Heritage Stamp issues are the longest-running U.S. stamp series, having always commemorated people rather than organizations or events, including playwright August Wilson and tennis player Althea Gibson.

The latest artist to be included in the legacy is Edmonia Lewis, a sculptor of Haitian and Ojibwe descent, who some historians have identified as the first Black artist in her medium to receive international recognition, according to ARTnews.

Lewis’s postage stamp is based on a portrait that Augustus Marshall painted sometime between 1864 and 1871.

The success of the Black Heritage Stamp series lies in the strength of its portraiture, which has presented challenges when representing early subjects for whom there are few source images, according to the Smithsonian National Postal Museum. However, portraitures have still produced impressionable and lasting designs.

Orphaned before she turned 5 years old, Lewis lived with her mother’s nomadic tribe until she was 12. She went on to study at Oberlin College, where she was accused of poisoning her white roommates. Lewis was acquitted of the charge, though she had to endure a highly publicized trial and a severe beating by white vigilantes. Following this, she was not permitted to graduate from Oberlin due to accusations of her stealing art supplies.

During the late 19th century, Lewis was highly regarded across North America and Europe for her innate ability to bring her sculptures to life with minimal training and assistance. Although many of her sculptures did not survive, historians have noted her early determination to become a sculptor. She traveled to Boston and established herself as a professional artist, studying with a local sculptor and creating portraits of famous antislavery heroes. She began producing medallion portraits of well-known abolitionists such as William Lloyd Garrison, Charles Sumner, and Wendell Phillips, notably without exposure and experience.

Her Death of Cleopatra (1876), crafted from more than 3,000 pounds of Carrara marble, endures as her most significant work. It was first exhibited at the Centennial Exhibition in Philadelphia in 1876 and was greatly acclaimed by critics as the most impressive American sculpture in the show.

In a statement regarding the stamp, the USPS said, “As the public continues to discover the beautiful subtleties of Lewis’s work, scholars will further interpret her role in American art and the ways she explored, affirmed, or de-emphasized her complex cultural identity to meet or expand the artistic expectations of her day.”