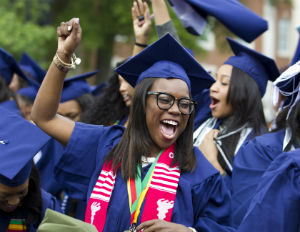 President Barack Obama is the sixth sitting U.S. president to deliver the keynote address at a Howard University commencement. In addition to more than 2,300 graduates, more than 25,000 family members were in attendance.

It was also one of the best speeches of his presidency, reportedÂ Mic. “The speech was unapologetically black, quoting black author Zora Neale Hurston, lauding singer Prince, and applauding activists in the Black Lives Matter movement who fight for racial justice.â€ At one point, Obama even told graduating students to “be confident in your blackness.â€

In his commencement speech, Obama said the country is “a better place todayâ€ compared to when he graduated from college 30 years ago. “A lot of folks didn’t even think blacks had the tools to be a quarterback,â€ ObamaÂ said. “When I was a graduate, the main black hero on TV was Mr. T.â€

Obama told graduating students to serve as “seeds of changeâ€ and pointed out how many great American icons started off at Howard.

According to theÂ school’s website, Howard University President Wayne A. I. Frederick awarded Obama with a Doctor of Science degree, rather than a doctor of laws or letters, to call attention to the importance of the passing of the Affordable Care Act, affectionately known as ObamaCare, for all persons in the country.

“The seeds of change for all America were sown here,â€ Obama said.

“So make no mistake, Class of 2016. You’ve got plenty of work to do,â€Â saidÂ Obama, speaking of the many challenges and issues including the “justice gap,â€ terrorism, racism, and inequality needing attention in the country and elsewhere.

“But as complicated and intractable as these challenges may seem, the truth is your generation is better positioned than any before you to meet those challenges.â€

Many Howard grads and supporters shared their thoughts on Twitter. Check themÂ out below.

I think we’re hearing Obama’s black voice. I knew we would hear it for real, for real in this last year. #HU2016

Congratulations to all @HowardU graduates! The world is yours. #CarpeDiem #Bison #HU2016

Congrats to #HU2016 ‘Plan to be following in their footsteps four years from now! #BlackExcellence

This post was written by Tommy G. Meade Jr., editor-in-chief of HBCU Buzz. It was originally published on HBCU Buzz. Meade is a journalist, writer, and blogger based in Ohio and a proud alum of Central State University. He is also a member of Iota Phi Theta Fraternity Inc.