From Social Worker to Chef: One Womanâ€™s Career Switch Journey 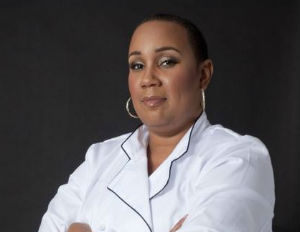 We’ve all been at that fork in the road called life. Maybe you’ve lost interest in your profession, your company has downsized or you’re afraid of making a career change. Well, if you’re ready to join the increasing number of people changing careers, meet Chef Elle Simone. From social worker to food stylist and founder of SheChef, a culinary entertainment company based in Brooklyn, New York, Simone knows a thing a two about pushing past fear to land a career you love.

Drawing inspiration from her childhood, she took a leap of faith into the culinary world in 2006. “Cooking was an activity that I grew up enjoying with my family in Detroit. My grandmother’s cooking was coveted in our community and it was our bond,â€ Simone says.

As a freelance chef/food stylist and producer, there is no typical day. One day can be solely dedicated to her business and the next week she could be producing a cooking show series or creating YouTube videos for major food retailers like Fresh Direct. “That is really the best part of my career; like snowflakes, no two are alike,â€ she says.

Simone hasn’t left her roots in helping people too far behind–mentorship is baked in her business model. Through her leadership program and the MarjorieÂ L.Â Price Scholarship;Â namedÂ after herÂ grandmother, she providesÂ financial aid to students seeking international culinary education.

BlackEnterprise.com caught up with the culinary maverick for some enriching Â career advice and one burning question in mind, “How’d you do it?”

BlackEnterprise.com: Why did you choose a culinary arts career?

Elle Simone: I knew at a young age that I wanted to be a chef, but I didn’t grow up seeing my image or anyone who looked like me in the industry. As a social worker, I used cooking as an outlet for the stress of my job. I would “moonlightâ€ as a line cook in the evenings and even though I’d be exhausted at the end of a day, I loved it and it was worth it. After a year of working in restaurants, I went to work on a cruise line as a cook, later moved to New York and interned at The Food Network. My career took off from there.

Before making a career change, how did you manage two competing careers? Any advice?

I don’t think it’s entirely possible to manage two competing careers for too long. For me, it started to become a conflict of interests. The transition took almost a year. I made sure that I had a new place of employment for at least 30 days after resigning from my previous career. My advice to anyone is also the same advice that I followed for myself:

Trust your instincts, doubt your fears: Once you’ve set your date to transition, stick to it!

3. How did you land a spot as Culinary Producer for Bravo TV’s “ChefÂ RoblÃ©Â and Co?”

I bid for the job as culinary producer for the show and was rejected initially. The person who got the job was a colleague who decided to take another project and asked me to take over. I learned two valuable lessons: Don’t harbor in rejections because what is meant for you will be and no matter when you come on to a project- finish strong!

Kandia Johnson (@kandiajohnson) is a communications strategist, writer, and world traveler. She is dedicated to empowering audiencesÂ to tap into their hidden potentialÂ to achieve success. Driven by a passion to help people and organizations turn vision into reality, Johnson creates content that educates, engages and inspires.