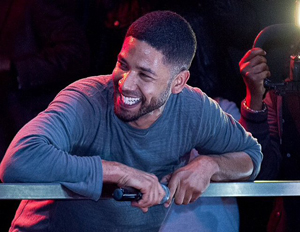 Jussie Smollett, star of the hit TV sensation Empire, recently stopped by the “Steve Harvey Morning Show” to talk about the show’s success and its off-the-charts two-part season finale. Smollett also shared his admiration of Harvey and his work ethic, stating, “I really look at you though Steve, I really do look at you and what you’ve done. The way you’ve been able to keep your career, you know, just climbing every single day you’re doing something new. … I have such love and respect for you.â€

Smollett also talked about his new song “No Apologies,â€ that his character Jamal sang in the very first episode of the pilot. The star also dished juicy details on the season finale, telling Harvey that he gets physical with Patti LaBelle, and that Jamal and Lucious finally come together in a really special and passionate way. “Get your inhalers. It’s going down.â€

According to Entertainment Weekly, Empire has dominated ratings and has been the leading show on broadcast, averaging about 15.8 million viewers and growing more than any other series since House in 2004.

Excited fans, groups and organizations across the country hosted watch parties, including the American Black Film Festival, for the finale which was one of the most viral trending topics of the night.