Enough With the Hillary Bashing, Let's get down to business 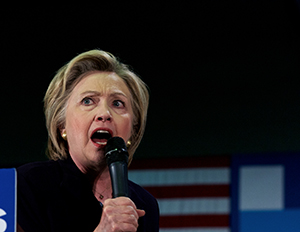 Day two of the Republican National Convention made history by officially nominating businessman Donald J. Trump for President of the United States. When the time came to vote, state after state was called to cast their delegates based on primary results. However, when it was New York’s turn, the state decided to pass.

The magic number is 1,237 delegates to win the nomination, which is half of the total national republican delegate count, plus one to represent a majority. Edward Cox, the Chair of the New York Republican State Committee, decided to pass in order to allow other states to cast their delegates, so that the New York delegation could put Trump ‘over the top’–the 1,237 threshold. That historical moment came after Pennsylvania cast their delegates, and the Quicken Loans Arena, home of the Cleveland Cavaliers, erupted like it was game seven of the NBA Finals–possibly even louder.

But the excitement didn’t stop there.

Governor Chris Christie’s speech was a public indictment of Secretary Hillary Clinton for the scandals stemming from Benghazi, emails, servers, and nefarious donations to the Clinton foundation. He told the crowd, “We must present those facts to you, a jury of her peers, both in this hall and in living rooms around our nation. Since the Justice Department refuses to allow you to render a verdict, let’s present the case now, on the facts, against Hillary Clinton. She was America’s chief diplomat. Look around at the violence and danger in our world today–every region of the world has been infected with her flawed judgment.â€

In turn, the audience was prompted to shout, “Lock her up!â€

Donald Trump, Jr.’s speech followed and was well received by delegates across diverse demographics. Trump, Jr. took the opportunity to get in more anti-Hillary jabs, but mostly spoke about what America really needs. He highlighted the need for decent jobs, saying that the country will elect his father, a president “who’s actually created real jobs, who has actually signed the front of a paycheck, and who doesn’t just talk about it in theory. A president who has real people’s families and livelihoods dependent on his success and the success of his company for decades.â€ He also spoke of creating a pro-business environment and providing school choices for every American–all of which empower the least fortunate.

Trump’s youngest daughter, Tiffany, also addressed the convention. Taking a different route, she highlighted her father’s character. The recent college graduate said of him, “Whatever he does, he gives his all and does it well. His desire for excellence is contagious. He possesses a unique skill in bringing that trait out in others. He’s always helped me be the best version of myself by encouragement and example. He motivates me to work my hardest and to always stay true to who I am and what I believe. That’s what he does.â€

Hopefully, the convention on Wednesday and Thursday will include more discussion about issues and policy that empower America and revive the economics of the black community. With the recently released republican platform, there is plenty to talk about. This year’s presidential race is for the GOP to win or lose, and there are millions of democrats and independents watching who seek an alternative to Hillary. This convention is free media and the optimal stage to pivot to a broad and inclusive message that can “Make America Great Again,” if delivered effectively.