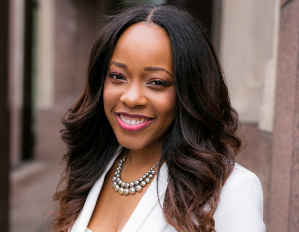 Roshawnna Novellus founded EnrichHER to empower female founders with the capital needed to build their businesses. Her platform leverages crowdfunding to source funding opportunities for women-led businesses. In addition to the funding platform, Novellus hosts EnrichHER Spark events around the nation; gathering female founders and investors.

Black Enterprise contributor Brandon Andrews spoke with Novellus about EnrichHER and her plans to get more resources into the hands of female founders.

Brandon Andrews: Every entrepreneur has a point at which the problem they see motivates them to create a solution and build a business around it. What was that point for you?

Roshawnna Novellus: Numerous people asked me this question either through consultations or my speaking engagements. As such, I knew it was a huge problem. A few years ago, I decided to take on researching why women-led businesses receive less funding than male-led businesses.

VC firm First Round Capital found that teams in its portfolio with at least one woman outperform all-male teams by 63%. I set off to gain as much insight as possible by attending angel investing groups and business competitions. I noticed that 99% of the investment decision makers are older white males. In a time where it is known that investors will only consider founders that they know, like, and trust it was more evident than ever that one of the reasons that women are underfunded is that they rarely have a seat at the table. As a result, I took action and created programming that would connect entrepreneurs of color and women with investors who have an interest in investing in them.

Every time I can help a women-led business succeed, I believe that I’m fulfilling my purpose. I believe that providing capital for women-led businesses provides economic empowerment, inclusive economic growth, and overall gender equality. As the number of sustainable women-led businesses increases, society as a whole will benefit from inclusive job growth, as well as products and services that better reflect the input of women. Once women have a larger role in the economies of our communities, we will be able to build a society that is more reflective of our needs, desires, and aspirations

You want to bring more resources to female entrepreneurs. Why don’t resources—capital, connections, and information—get to female founders?

The biggest problem is access and inclusion. It’s one thing to let a woman into a room, but it’s another to give her a voice at the table. Many of the programs that exist are not set up a way that women deem accessible. Women typically have many commitments in their daily schedule. As such, we need more planning and flexibly to commit fully to resources that can help us grow. Also, often, women need to feel more prepared than our male counterparts. All of the women who are in my Halcyon Cohort are older than all of the men. One simple fact is that we don’t apply to opportunities until we feel like we’ve worked hard enough to deserve these opportunities. The bar women set for ourselves tends to be much higher than our male counterparts.

Beyond the programs that EnrichHER provides female entrepreneurs, is a larger societal shift needed to ensure female founders have access to resources?

A platform like EnrichHER focusing on women-led businesses would mean many things including that women receive the same opportunities for funding as men. This issue is urgent because women deserve to grow their economic independence and power. Women can no longer wait for the existing set of politicians, tech companies, and development agencies to advocate on our behalf to make this change. Millions of women every day find it difficult to pursue their dreams because of limited access to capital. The time is now for EnrichHER to help those women.

Access to capital is the  No. 1 need articulated by entrepreneurs. EnrichHER is addressing this for female entrepreneurs by building a debt crowdfunding platform. Why was it important for you to build a platform in this nascent space?

Most of the media hype focuses on venture investment. We know that less than 1% of all companies receive equity investment and less than 8% of that number is allocated toward women-led ventures. EnrichHER simply wants to focus on the 99% of women-led ventures who need financing. As such, we’ve decided to focus on a debt financing platform as studies have shown that debt financing is 75% of the financing market. Furthermore, the other significant women-concentrated platforms focus on equity or debt. As such, we believe we are delivering something that the market needs.

Andrews: In 2017, Nielsen released a study entitled “African-American Women: Our Science, Her Magic.” The report lauds black women as entrepreneurs and trendsetters who control the majority of the over $1T in black buying power. Why is equity crowdfunding important for black women in particular?

Dr. Novellus: Studies have shown that 50% of all crowdfunding campaigns are women-led. As such, crowdfunding is the most efficient way for women to receive capital. We’re leveraging these statistics to help the highest number of women.

Although black women often don’t receive the credit, we are the international trendsetters across most industries. If black women show the world that we can break through the roadblocks set in place for our economic independence, we can show the world that we can create a society that is more reflective of our dreams, goals, and worldview. By doing this, we can capture more of the economic power that is often taken from us.

Andrews: How will the crowdfunding platform work, and what is the timeline for launch?

Dr. Novellus: The Funding platform allows women in the EnrichHER community to connect directly to investors who can help them grow. It will allow everyone to participate whether they have $100 or $100,000 to lend. We expect to launch the EnrichHER Funding Platform in April 2018. The platform will be open to unaccredited and accredited investors.

You were recently awarded the Halcyon Incubator Fellowship. The program is for social entrepreneurs. How are you integrating social good into your business?

Dr. Novellus: Non-financial success for us will ultimately be measured by the number of women who use EnrichHER as the inspiration to start and sustain their businesses. We have already achieved a measure of non-financial success in the form of positive comments and feedback from the entrepreneurs who have already become a part of the EnrichHER movement. In one instance, a woman founder stated that her participation in the first EnrichHER conference was the reason that she finally publicly announced her business and put it in a position to thrive. So many other women have personally thanked us for the valuable information shared at the EnrichHER conferences. The impact will continue to be measured by inspiration, feedback, and change in mindset.

Dr. Novellus: Our growth happens through partnerships. We’re looking for financial institutions, investment funds, entrepreneurship groups and other partners who share our vision. We believe that by working together, we can help women win nationwide.