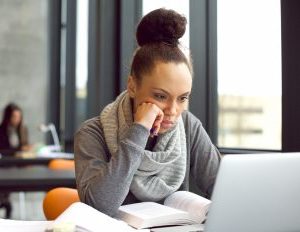 The Center for American Progress has released a report that shows the for-profit graduate school sector is doing well, although for-profit education, in general, is in decline.

For-profit graduate school? Yes, there is such a thing, and black women are overrepresented in the sector, according to CAP.

Although much has been reported about for-profit schools defrauding and misleading students, much less information is available about the for-profit graduate sector. The Center for American Progress says there is plenty of cause for concern.

And now that Trump, whose own for-profit Trump University allegedly defrauded students, is president-elect, for-profit stocks are up. Student protections that the Obama administration put in place may no longer be enforced, and with the new administration, some are expecting an overall climate of deregulation.

I recently spoke with an African American woman who earned a graduate degree from Strayer, a for-profit school. She said the school’s flexibility won her over.

But when I asked Elizabeth Baylor, the author of the CAP report, about the appeal of for-profit flexibility, she wasn’t impressed.

“People who are considering enrolling in a graduate for-profit program should think about more than just convenience,â€ Baylor told me in an e-mail. “Enrolling in a public graduate program allows students to earn a degree that employer’s value at a more affordable price, and overall that is a better bargain and a far better return on investment.â€

You don’t have to sacrifice quality to get convenience. Baylor says that at public and nonprofit graduate schools, about 25% of students take advantage of flexibility and are enrolled in online or a mix of online and in-person classes. For example, you can pursue a highly ranked full online master’s degree in computer science through Georgia Tech.

Graduate for-profit programs take in nearly $5 billion annually, mostly through federal student loans. But whether or not you complete your graduate degree, you will be on the hook for paying back any loans you take out.

Don’t fall for the for-profit sector. It preys on minorities, veterans, and the poor. These schools are in it for the profit, not to educate or empower students.