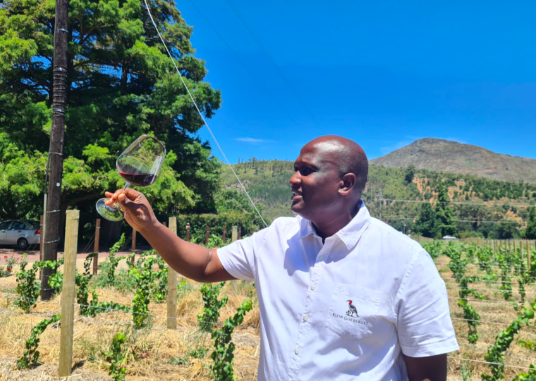 A businessman in South Africa has become the first Black man to own a vineyard and winery in the country.

Paul Siguqa, 41, grew up watching his mother labor in a white-owned vineyard in Franschhoek, South Africa.

“We inherited nothing. Because we are first generation, everything starts with us. So, the burden’s a lot heavier,” Siguqa said in an interview with The New York Times.

He added that his mother encouraged him to continue his education, despite the fact that most of the 43 classmates he started with dropped out to work in the vineyards.

During his teenage years, Siguqa reportedly sold fruit on the side of the road to purchase his first car.

He then was able to save and leverage that same determination to afford college and attend Cape Peninsula University of Technology and the University of the Western Cape.

But the vision Siguqa had did not stop there.

After reportedly saving for nearly 15 years, Siguqa was able to restore and open the Klein Goederust Boutique Winery.

The move now makes Siguqa the only fully Black-owned winery in South Africa, despite the country being recognized in some capacity as a prestigious wine valley.

However, Black South Africans, who are 80 percent of the population, only own about 2.5 percent of the country’s vineyard acreage, according to industry trade group VinPro.

Those struggles surely played a role in some of the difficulties faced, but did not stop Siguqa from accomplishing his childhood dream.