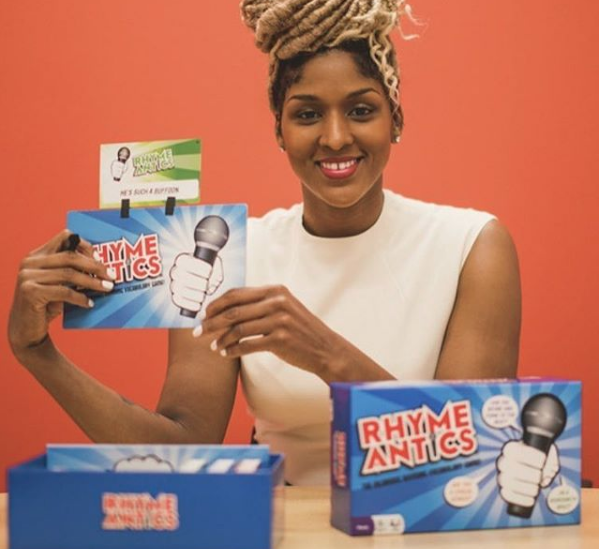 Board games are the center of game nights. And with all of the fun that they offer, there is very little representation of black culture within the industry. That, hip-hop, and literacy are what inspired Chantel Calloway to create Rhyme Antics.

Rhyme Antics is a rhyming vocabulary game inspired by hip-hop for people 12 years old and up. Players must think to the beat while freestyling in proper English. The game includes over 12,000 vocabulary words, including SAT words. And if it sounds like a good challenge and fun, it’s because it is!

“My family and I were tired of playing and Taboo and Catchphrase,” Calloway says. “So, my dad comes up with this call and response rap game. We realized we love playing it and every time we got together as a family, the kids really wanted to play and we just had so much fun!”

Calloway’s boredom and curiosity led her to research what it would take to create a game of her own, not a reiteration of an old favorite.

“There was nothing like what we were doing,” she says. “In 2011, I started putting together the game with no experience. I bought a bunch of games, looked at like the gameplay mythology, and I started developing the game.”

As the creator of the game, her mission is to, “create awareness around illiteracy. We have a literacy crisis in this country that’s not being talked about. Statistics show that there are 36 million Americans who can’t read. It’s definitely socio-economic and it affects black and brown families and kids. And, the problem is really in the schools and the curriculum. There’s a lot of focus on STEM, but, you have to know how to read,” says Calloway.

Rhyme Antics offers an opportunity to learn while engaging in a good time. The challenge is to test your vocabulary skills. Rhyme Antics uses difficulty levels of rhyming and vocabulary words combined with music to develop each player’s fluid intelligence.

Here’s how it’s played: “Two teams battle for four rounds to determine the winner,” Calloway explains. “A team chooses a difficulty level of their choice. Each level is worth more points and you go up in points depending on the difficulty level. You have to select a card at random. And then, each team has 60 seconds for each person to spit a bar (one creative sentence). The words on the back of the card that you’re trying to guess must rhyme.”

It took Calloway five years to get the game market-ready.

During those five years, Calloway learned the ins and outs of the game industry in addition to entrepreneurship. She is one of three black entrepreneurs who has had a game or toy on the shelves of major retailers.

“There’s only been three of us in the toy space that will that have gotten into big-box. So, the first one was Lonnie Johnson, who created the Super Soaker. The second is Dr. Lisa Williams, and she owns a black doll company called Positively Perfect Dolls.”

The game can be found at toy retailers and bookstores nationwide, including Camp, Sparkhouse Toys, and jaZams. There is also a digital component available on iTunes and the Google Play store.

Breaking into the board game and toy industry has its challenges, but Calloway says she is up for them.

“When you go into stores, you see thousands of products, yet we occupy less than 1% of that space. I always ask myself, ‘Are we not just trying to achieve this goal? Are we not thinking that big? Or, are we being closed out?’ I think it’s a combination of all of that.”

All things considered, entrepreneurship can be emotionally taxing. Like many entrepreneurs, Calloway has experienced the highs and lows of chasing her dreams.

“The struggle has been real, but, I finally feel successful. At the beginning of 2019, I was going to give up. I was all out of inventory and I didn’t know like how I was gonna find money to re-up. Every time I’ve wanted to give up, God has thrown me a lifeline. I found an angel investor who gave me money to just buy 1000 units. But then, they got stuck in inventory with customs and I didn’t get them released until the day before Christmas.”

Even though Calloway didn’t quit, she says that it was hard to overcome the idea of doing so multiple times.

“I was in a depression. I think it’s interesting that people don’t really talk about how many entrepreneurs commit or think about committing suicide. I put nine years of my life into this and I questioned was it going to go anywhere.”

Mentorship has been an instrumental part of Calloway’s journey and success. Being able to receive guidance from industry veterans like Dr. Williams has helped her navigate the business side of the game industry.

“At the moment, I have three major deals on the table and I’m trying to figure out what’s the best for the business,” says Calloway.

And as she is in the process of making that decision, Calloway says that maintaining the integrity of the product is important.

“I turned down the first licensing deal that I was offered because the company didn’t understand the community that this product talks to. They had a worldwide distribution, I could get them [the game] into Target and Walmart, but they didn’t know how to market the product. Even though [Rhyme Antics] is not just a black product, it is a hip-hop product, and that is black culture.”

She goes on to say, “It’s easy to get lost in the money. Bu I’m truly passionate about the impact it [the game] has on the community and the kids. I don’t want that to get lost because of a transaction.”

As Calloway enters her ninth year of entrepreneurship, she is grateful for her journey and is relentless in her pursuit of building literacy in children and adults.

And to those on their journey, Calloway offers this advice: “Believe in yourself.”

If you want to turn up and test your rhyming skills, be sure to find Rhyme Antics in stores near you, on Amazon, and online.