Entrepreneurs of the Week: Mychal and Adrienne Connolly - Black Enterprise 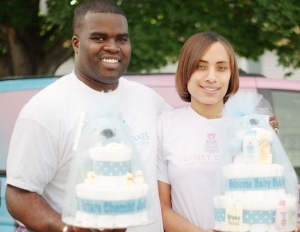 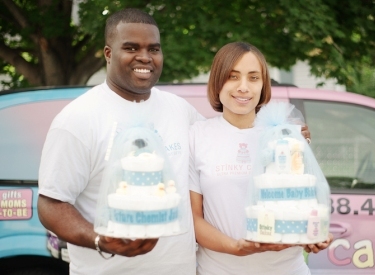 Mychal and Adrienne Connolly, you might say, are kid-oriented adults – and by that we don’t mean to suggest that they’re childish or immature. Quite the contrary, in fact: Passionate advocates for the young, the Connollys took in their first teen foster child five years ago, when Mychal was 24 and Adrienne just 22.

So it’s appropriate that the couple – now the parents of two sons of their own – would start a kid-centric business: the felicitously named Stinky Cakes, a diaper and baby-goods company they founded in 2009 (shortly after the birth of their second son) and run out of their home in Springfield, Massachusetts.

The name comes from the “cakeâ€ diaper towers that are the Connollys’ signature product. New parents need diapers more than anything else, the couple reasoned, yet friends, relatives and baby-shower attendees are often loath to show up with a plain old uncreative box of Pampers. “There’s a stigma for some folks when it comes to giving diapers,â€ Mychal, now 29, says. “We wanted to make diaper giving fun.â€ Stinky Cakes offers numerous diaper packages: animal, sports and princess themes, corporate gifts, twin-specific items and more, all of it fully customizable. Plaudits have poured in: Adrienne is one of StartupNation‘s “200 Leading Moms in Business,â€ while Mychal is one of BusinessWest magazine’s 40 top regional entrepreneurs under age 40.

Their business fortunes have waxed and waned amid the struggling economy, but the Connollys’ ardor for children is as strong as their desire to turn Stinky Cakes into a lasting business success. “That stems from the values our parents instilled in us,â€ Mychal says. “It’s one of the things we’ve always had in common—wanting to help kids. There are so many kids out there who just need a little guidance.â€ And, for the youngest among them, a Stinky Cake or two.

For more on Mychal and Adrienne Connolly’s booming baby business, check out 100UrbanEntrepreneurs.org.