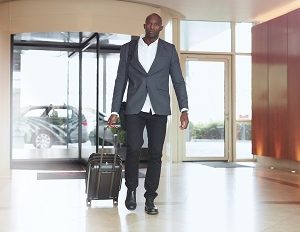 Erica Johnson-McElroy is here to defy that stereotype. As the director of public relations at Four Seasons Hotel Las Vegas, she works to promote the brand to encourage travelers (of all shades) to experience luxury when they visit Las Vegas. And though working for a luxurious resort in one of the most bustling cities in the world may seem like glitz and glamour 24/7, there’s a lot more to the role than you may think.

Johnson-McElroy spoke with BlackEnterprise.com about the challenges of being a woman of color within the hospitality industry, what led her to her current role, and lessons she’s learned along the way.

BlackEnterprise.com: You have an interesting background, first working in the journalism realm. What made you make the transition to PR?

Erica Johnson-McElroy: I was working at a daily newspaper in a metropolitan city. I was mostly covering violent crime and courts, which was fascinating but also unsettling. At the end of each day, I’d continue to think about the stories I’d covered and the subjects I’d interviewed. Add to that the demands of daily deadlines and it was the perfect storm. Public relations seemed like an ideal way to transition my writing and communication skills into something more enjoyable and personally satisfying. The stars aligned and I landed at one of the city’s largest advertising and public relations agencies. I took an entry-level position and worked hard to learn the industry. Public relations was a natural fit. I’ve never looked back.

What are some of the challenges you’ve faced as a woman of color in the hospitality industry? In your role specifically?

Interestingly enough, I faced more challenges as a woman of color while working in journalism. I was frustrated by how minority communities were often portrayed in the mainstream media and I felt a sincere obligation to cover those communities in a fair and honest way. At times, this desire conflicted with the assignment and the time given to complete it. The hospitality industry has been a different experience. Four Seasons Hotels & Resorts is a global company, so in many ways, it is extremely diverse, with colleagues hailing from all parts of the world. And while women are historically under-represented in leadership roles within the hospitality sector, we are making great strides. At Four Seasons Hotel Las Vegas, for instance, several members of the senior management team are women. It’s thrilling to witness this shift firsthand and more specifically, to work alongside and learn from the women in these key roles.

What’s the best part of your job?

There are many things I love about what I do. Perhaps what I enjoy most are the connections I’ve made with the people with whom I work, and everything I’ve learned from them. At times, being the sole public relations person in the building can feel a bit like being on an island. However, having the opportunity to collaborate with various members of the operations team, from spa to food and beverage and sales, has taught me so much about the hospitality industry and about business in general.

What has been your greatest accomplishment since taking the helm of your role?

Successfully integrating social media into the hotel’s marketing initiatives. When I joined the company nine years ago, social media was still very new and there was no guide book. Much of it was trial and error and simply figuring out what worked in an extremely dynamic social media landscape. We not only had to determine how to best use these mediums to enhance our marketing goals, but learn how the luxury guest uses social media and how they prefer to be communicated to on these platforms. Today, the hotel has robust social media feeds on Facebook, Twitter, Instagram, and Pinterest. Some of the content is promotional and some of itÂ is aspirational, but all of it is carefully curated, relevant and developed with the luxury traveler in mind. I’m very proud of how far we have come.

How beneficial have mentors been for your career growth?

I learned early on that relationships are the key to one’s success. In my case, mentors have been both formal and informal. There are many people with whom I’ve developed close relationships and count on for professional advice. In other cases, I’ve simply admired careers from afar. Some of the people I credit most with influencing my professional growth are people I once worked for and to whom I continue to look for guidance. And of course, I have friends and colleagues in the industry, whether hospitality, journalism, or public relations, whose opinions I greatly value. Having a circle of people you trust who root for you and want to see you succeed is invaluable.

What’s been your biggest career lesson?

Be open to change. This is a lesson I continue to struggle with because I’m inherently regimented. However, I’ve never regretted the occasions when I’ve stepped out on faith and made a change. This was the case when I left journalism to pursue public relations and again when I left an agency setting to venture in-house. All of those moves were terrifying yet exhilarating. Ultimately, each transition brought me to exactly where I was supposed to be. I’m excited to see what the next phase of my career will bring.

Although your job has you in one of the most popular tourist destinations in the world, what are some other destinations (domestic or international) that you like to visit and vacation?

I’m naturally attracted to the energy of large, metropolitan cities like New York and San Francisco. I enjoy the culture and diversity those destinations offer. And while I’d love to say I’m an adventurous traveler, like many women my life is hectic as I struggle to balance it all. So if I can lay on a beautiful beach with a book and stare out at the ocean, I’m a happy girl. I love Punta Mita, Mexico, because it feels exclusive and secluded but it is still easy to get to. And the sunsets are postcard-worthy. I’m also a fan of Montego Bay, Jamaica. There’s something about seeing your feet at the bottom of the ocean while tropical fish circle around. It gets no better than that.