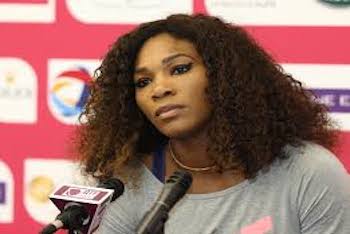 ESPN commentators have inspired a Change.org petition after accusing tennis superstar Serena Williams of being under the influence of drugs during a Wimbledon match.

July 1 marked an event where Williams was set to play a doubles match with her sister, Venus, as reported by Business Insider. Visibly off her game, she had problems focusing on the tennis ball and appeared to be uncoordinated. She even had problems serving and grabbing the ball right off the ground.

With the game delayed for 13 minutes as the chair umpire expressed concern for Williams’s ability to perform, ESPN commentators Chris Evert and Pam Shriver offered their two cents. “This is not an illness,” Shriver insisted of Williams’s condition. “It’s almost like she has taken something that makes her feel dizzy, disoriented, and she cannot reach up and strike the ball.” Evert, cosigning his commentating cohort, asked, “Is it a virus? Is it something unintentional or intentional in her system that they may drug test for?”

Hearing those utterances outraged fans of the dynamic tennis duo who began a petition that called for an apology. To date, 1,263 people have signed thus far, and comments have ranged from wanting the ESPN twosome fired to urging for a sincere apology. “We decided to start this petition to ask Evert, Shriver and ESPN to apologize because the comments made against Serena Williams were not only speculative and distasteful, it was also disparaging, libelous, pejorative, malicious and slanderous,” the petition explains.

Williams, 32, has admitted that she is in a “difficult place” with her health. It is no secret that she suffers from pulmonary embolism, which is the blockage of an artery in the lungs, so suggesting that she would use drugs is a bit unwarranted.

Do you think Evert’s and Shriver’s comments were inappropriate? Speak on it below!