ESPN SportsCenter Anchor Elle Duncan: 'It is Important for Black Women to be Amplified in Every Field' 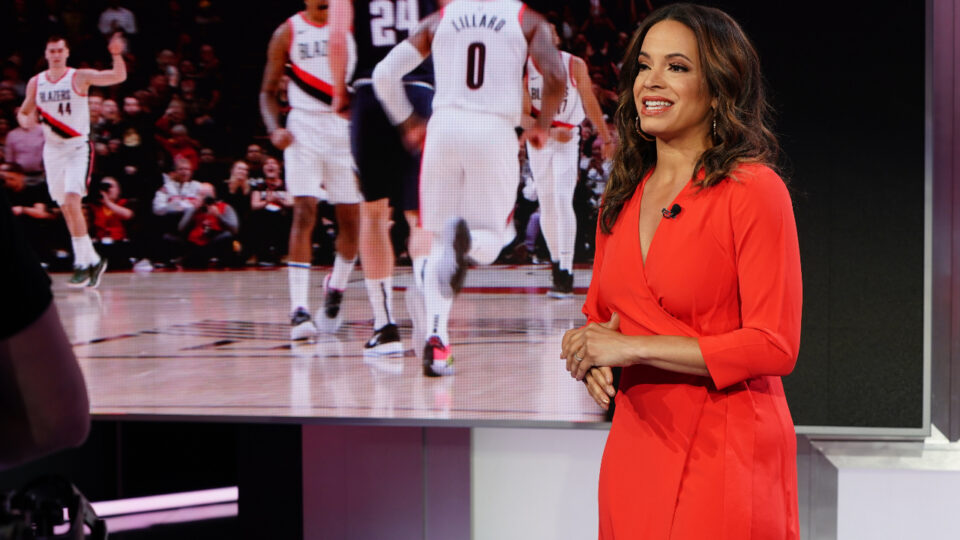 Being a person of color in the sports world remains difficult. Its positions of power are monopolized by white men. So a Black woman hosting a sports media giant’s signature show is more than an accomplishment; it’s part of a hopeful trend of inclusion.

ESPN‘s Elle Duncan is co-anchor of the 6 p.m. weekday SportsCenter. She just signed a new multi-year deal with the sports network that virtually guarantees her spot for several more years. Duncan began her career in broadcasting in 2003 as an entertainment reporter for former Atlanta sports radio station 790 the Zone. Two years later, Duncan began a seven-year stint as an on-air personality with Atlanta hip-hop station V103.

She then moved into the sports arena as co-host of pre-game, halftime, and post-game shows for the Atlanta Falcons Radio Network in 2010 and 2011. After working stints in the Atlanta area, including as a sports anchor and reporter with WXIA-TV from 2012-2014. She then worked for the New England Sports Network (NESN) before landing at ESPN in 2016.

BLACK ENTERPRISE spoke to Duncan via email about the importance of being a successful Black woman in a white male-dominated world, how she navigated her way around the broadcasting field, and how she sees her life in 20 years.

Congratulations on your recent contract with ESPN. What do you attribute your success in your career to?

I certainly hope it’s because of my authenticity. I was sort of bullish from the beginning of my career about staying completely and unapologetically myself. I realized that if I was going to expose myself to public scrutiny or adulation I was going to do it being as genuine as possible. I’d like to believe that sort of consistency and transparency has helped me connect with others who, like me, have stumbled and succeeded despite it. Finding your way while remaining recognizable to yourself and those who love you. For me, that’s a more intentional career focus than an assignment or specific opportunity.

How important is it as a Black woman to be elevated in a field that is still mostly white, male-dominated? How are you able to navigate through this?

First of all, It is important for Black women to be amplified in every field because we are valuable and should be regarded as such. But it’s of particular importance in white male-dominated spaces because of the challenging path Black women have to journey to even permeate these “sanctified” spaces. The sacrifice, the audacity to envision a space for yourself with very few visible examples to cling to. The knowledge that upon arrival at said table history dictates your work will be monetarily valued at a third of that of your white, male counterparts. Black women should be celebrated because despite everything working against them they find a way and the quiet acknowledgment of that is no longer enough it must be intentional and overt.

I navigate this space the same way I navigate life as a minority—with cautious optimism that would have me enter a situation hopeful to be judged by my work, knowing full well, that won’t always be the case. A stark reminder of the general sense of polite discomfort POC live with every day.

How has the landscape changed for people of color and what do you predict will happen to continue this trend of excellence that you have been a part of in the broadcasting game?

I think companies are realizing that there are so many avenues for storytellers, creators, and broadcasters that they’re now meeting people where they’re at. It’s as trivial, yet meaningful, as seeing natural hairstyles embraced on TV or the amplification of personalities and stories that don’t necessarily ‘fit” what many places have deemed their “target audience.” I’m hopeful the future brings more cache for Black people behind the scenes as well. Representation in decision-making spaces is a huge part of most successful peoples’ ascent. If we aren’t reaching the highest ranks how can we lift those behind us?

What advice would you give to anyone who wants to be successful in whatever they pursue as a career?

Go hard at Plan A, but have a Plan B .. and C and D, too. Blasphemous, right? I’m supposed to tell you to sell out on one thing and go at it with every ounce of gusto you can muster. But I’ve learned that having a few avenues to travel down if my main goal hits a detour, keeps me from compromising my overall happiness. If I am consumed by one thing, I’m beholden to it and in turn, will use any tactic in pursuit of it. I have always kept what I do separate from who I am and a large part of that comes from envisioning many paths for my life!

There is a crystal ball directly in front of you, what is Elle Duncan doing in about 20 years?

I’ll be tickling 60. I hope I’m doing whatever the hell I want by then. Honestly, I try to be incredibly intentional about my current season as I know that once it’s gone that’s it. God willing I’m somewhere watching my kids thrive as young adults with my husband still telling me I load the dishwasher wrong. Career highlights will come and go but all I truly want for my life is to live it as joyfully as possible, connecting with as many people as possible along the way. I think that sounds like quite a nice life.